Here you can discover some of the more popular board games published in 1999. I think you’ll find at least one that you’ll want to try. 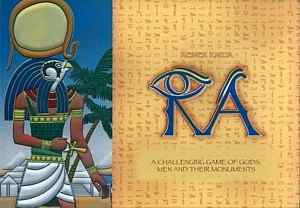 Several fun board games were first published in 1999 that are still very popular today.

Ra, designed by one of my favorite board game creators, Reiner Knizia, is a bidding game with an ancient Egyptian theme. As with many Eurogames, the theme really doesn’t matter much, but the artwork does give the flavor of the old hieroglyphics.

At the start of each round, or epoch as the rules term it, you have three numbered yellow sun disks with which to make a one-time bid for an assortment of tiles that have been drawn blindly from a bag. In a go-around-once auction, if you have the highest bid, you collect the tiles from the main board.

Most of the tiles will be good for you and will award you points. Some may be neutral for the time being, and others will be disastrous – meaning negative points through the loss of other tiles.

When you have won three auctions in a round, you’re out until all other players have spent their suns or until enough red Ra tiles, which act as the game’s timer, have been pulled from the bag.

There is scoring after each round, and there are three epochs before final scoring. Scoring is not exactly straightforward as in one point per tile, and it’s a more complex topic than I want to delve into here. Just remember that this is a Knizia game, so you’re in for something unusual when it comes to scoring.

If you are a decent poker player or are good at other bidding and bluffing games, you’ll probably like and do well at Ra. I don’t usually do well in this game, but I still like it anyway. Every once in a while it just “clicks” with me, and I have an awesome score at the end. Much of the fun is the interaction with the other players – trash talking, vocal bluffing, etc.

Tikal was created by Wolfgang Kramer (of El Grande fame) and Michael Kiesling. This pair of designers has often teamed up to produce some wonderful games.

Tikal is one of my favorites, but it doesn’t get played much in our circles. In fact, as of this writing, I’ve only played it 6 times total. Part of the reason might be its length, but some of the other games I do get to play a lot are even longer.

In Tikal, you imagine yourself exploring the jungles of ancient Guatemala in the days of the Mayan civilization. As you forge further and further into the jungle, you discover temples and treasures which you must claim to score points. Make good use of your team of explorers to hold onto more of these by muscling out the other players and you’ll likely win the game.

Tikal is one of those games, at least in my limited experience, in which the early leader can by hard to catch. If you’re that leader, watch out for others trying to gang up on you. If you’re not that leader, try to make an alliance (spoken or otherwise) with the others, so one of you has a chance to win.

Popular Fun Board Games from 1999