Welcome to the 8th in a series of reviews of 10 of my favorite board games. Today I’ll guide you through our family’s latest craze, Le Havre. 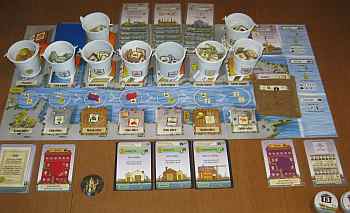 Yesterday I explained how to pronounce the Latin word Agricola. I know Latin a lot better than French, but I believe I’m correct in saying that this game is pronounced luh-HAHV. It’s nothing like how Brett Favre says his surname. Also, I’m pretty sure the game, which is named for the French port, means The Harbor. And that would make sense, since a large part of this fun game is about shipping goods out of the port for victory points.

In Le Havre, there is normally even less to do on a turn than there is in Agricola. In Le Havre, you only take one action per turn, and depending on how many players (2-5) there are, you might only have one turn per round! That’s okay though because this game scales really well and is equally fun no matter how many are playing.

You get one main action per turn. You can either take a pile of resources (tiles) sitting on the dock – francs, fish, wood, clay, iron, grain, or cattle – or you can use your token to enter a building (card), pay the entrance fee (if any) in cash or food, and take the action the building allows. If the building is owned by an opponent, you pay him the fee. If it’s owned by the city, you pay the city (main supply area). If you own the building yourself, there’s no need to pay.

You collect resources – either at the dock or in some of the buildings – to help build new buildings, to feed your workers, or to ship goods out of the port. Buildings you own at the end of the game are worth varying amounts of victory points.

At the end of each round, you must feed your people. The amount required increases as the game goes on. If you are unable to feed the full amount, you take out one or more loans, which you’ll want to pay back by game’s end. For each round that you posses a loan, you have to pay a small interest fee.

To assist in the feeding, you can build ships of wood, iron, or steel. Before anyone can build a ship, a wharf (card) must be constructed. Ships can be bought at any time, but the cost is usually prohibitive.

All the resources mentioned earlier, plus coal and (cow) hides, can be converted into more valuable goods, normally by entering a building that allows the conversion. The resource tiles are double-sided with the basic goods on one side and the upgrade on the reverse. Here are the conversions:

Winning the game usually involves a combination of building buildings and ships as well as shipping goods (usually steel, which is the most valuable). There seems to be about 600 points available in a game, no matter how many players, so in a 3-player game, for example, you should anticipate needing over 200 points to win amongst experienced players.

There are fun challenges in Le Havre. There can be agonizing decisions. Grabbing some goods or jumping on a building just before your opponent is a kick. Did I mention there can be only one player in a building at a time? No, I didn’t.

As with Agricola, it seems I could go on and on with no end in sight. I suppose that’s partly because of the way Mr. Rosenberg designed both of these fun board games.

Check the price of Le Havre on Amazon.