Citadels Is Best with More Players

Citadels is a card game for 2 to 7 players (best with about 5) in which you attempt to construct buildings (cards) that are worth varying amounts of points. If your collection of buildings, your citadel, is worth more than everyone else’s, you win. 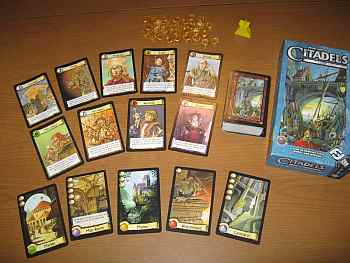 Each round you secretly select a role card which will give you a unique ability and hopefully enable you to build a better citadel faster than everyone else. Choose roles such as Assassin, Thief, Magician, King, Bishop, Merchant, Architect, or Warlord. If those roles give you a dark feeling, you’re probably in the right frame of mind for Citadels.

Citadels is a cutthroat game of one-upmanship. Be secretive and sneaky to get what you want and need. That said, if you don’t want to emphasize the dark theme, there’s no need to. Children can play this game too, with or without the darkness according to parental decision.

Much as in the card game San Juan, you spend resources to build (play) buildings (cards). When one player has built his eighth building, the game ends (after that round) and points are added. As usual, the player with the most points wins.

Most of the interest in comes from choosing the roles and trying to determine which players chose which roles. Thus it’s more fun with more players. Because of that fact, this isn’t a game I’ve kept in may collection. We don’t often have a large number of players interested in this type of card game. Still, the game is fun, and you should at least give it a try.

Check the price of Citadels on Amazon.

Beware the Assassin Near Your Citadels