Protecting the Queen Bee of the Hive 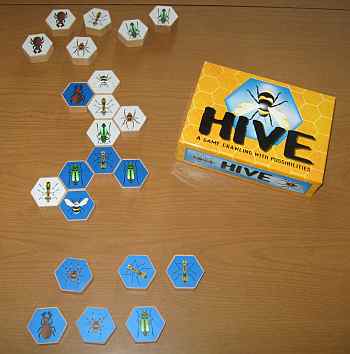 Hive is one of those “board” games that doesn’t have a board. The board moves around much like a swarm of insects.

Hive is a tile placement board game that uses hexagonal wooden blocks with pictures of various insects on them. You have a Queen Bee, ants, beetles, grasshoppers, and spiders. Each insect has a unique pattern in which it may move.

Hive is a 2 player game that has some similarities to chess. The biggest difference between the two, however, is that Hive doesn’t use a board. You can move your insects anywhere on the table as long as all pieces remain part of the hive; that is, stay connected.

The object of Hive is to completely surround your opponent’s Queen Bee thus preventing her from moving. Part of your objective then too is to keep your own Queen Bee from being surrounded. You need to think ahead a couple of moves to be sure she always has a way out.

Hive is a game with a delicate balance between offense and defense. You need to press the attack on the opposing Queen Bee while maintaining a safe haven for your own.

Speaking of similarities between Hive and chess, look to this post for more about the classic fun board game of chess.

Check the price of Hive on Amazon.

Buzzzzz around the Hive

One thought on “Buzzzzz around the Hive”