Be the Most Powerful of the Samurai 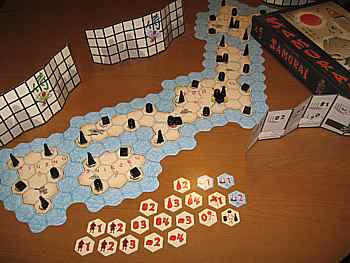 The shiny, black bits – squat buddhas, square rice paddies, and slender high helmets – feel very nice to the touch. It’s almost a shame you don’t spend more time handling them while playing Samurai. Most of the time, the Samurai pieces just sit on the board or behind your oriental style screen.

The other bits – the jigsaw-like board of Japan and the cardboard hex tiles – are thick and will last a long time, but they’re almost second-rate compared to those black bits.

The number of players (2, 3, or 4) determines how much of the jigsaw is used. To setup the board, you automatically place one of each of the black bits on Edo (Tokyo). Then you take turns semi-randomly placing 2 different bits on the red cities. When those are filled, you continue placing single bits on the remaining blue cities.

There can be some strategy in this setup, but more often than not (at least in games I’ve played) it’s just random placement to get the real game going.

Each player has an identical set of tiles in their own color – red, blue, yellow, or green. You start with all but 5 of them face down. On your turn you can place just one tile from the group containing tiles that match the black bits, several wild samurai warriors, and a tile-swapping hex. If you have any tiles from the group containing water tiles, the ronin (warrior on horseback), or the bit-swapping hex, you may also play as many of those as you like.

When a black bit (or group of bits) has been completely surrounded on land by hexes (of any colors), that bit is captured. The winner of the bit is the player who has the highest total on his tiles that apply toward the type of bit that was surrounded. For example, if a buddha on a peninsula is surrounded by 2 hexes – one a red 3-buddha and the other a blue 4-high helmet – the red player wins the buddha. Even though 4 is higher than 3, the high helmet hex doesn’t apply towards conquering a buddha.

Samurai, ronin, and water tiles are wildcards and can count towards any and all types of black bits. If there is a tie when fighting over a conquered bit, no one wins it, and the bit is set aside.

The game ends either when all the bits of one type have been conquered or when 4 bits have been set aside as the result of ties.

To be in the running for winning Samurai, you must have a majority of at least one type of black bits. If you have the majority of 2 (or all 3) types of bits, you win outright. If several players each have a majority, they set aside those pieces and count the remaining black bits they have won. The player with the most of these bits wins the game.

Check the price of Samurai on Amazon.