Collect the Scripts and Beware the Scribes

Scripts and Scribes is the original name of a set collection and auction card game that will keep you guessing who’s got what and who’s going to win all the way to the “final buzzer”. 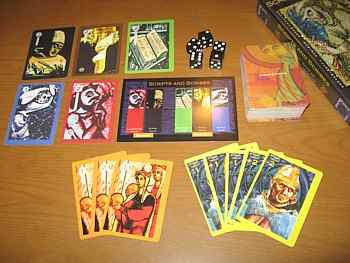 Scripts and Scribes now sells as Biblios. Biblios is the same game with upgraded components.

It’s not that the original components were low quality, but the newer cards and other bits do look more polished.

The artwork on the cards, for example, is more realistic compared to the original which tends toward the abstract.

In the first half of Scripts and Scribes, you take cards one at a time from the top of the (face down) deck – from which a few cards were randomly removed prior to the start of the game – and decide whether to

The auction pile will be used in the second half of the game.

Once you take a card for yourself, you can’t change it for a card that comes up later. Cards that you set aside for your opponents are played face up on the table. When there is one card for each opponent, they each decide in clockwise order which one to take in hand.

There probably won’t be a card for every player every round however. When one of the bishop cards is drawn, you take its action immediately and discard the card. No replacement card is drawn.

The bishop cards are used to manipulate the scoring dice. The five (colored to match the card suits, in Biblios) dice start with 3 on top at the beginning of the game. You may want to increase or decrease their values depending on which suits you think you’ll end up with at the end of the game. The bishop cards allow you to make those changes.

When the entire deck has been distributed to the players and the auction pile, the second half begins. You shuffle the auction deck and flip over one card at a time to place it up for auction. You and your opponents bid for the right to add it to your hand using cards you accumulated in the first part of the game.

Many of the cards are “gold” cards which can be used to pay for cards at auction. Normally you’ll use these to bid on suit cards. If a “gold” card comes up for auction, you bid with any number of cards and discard them – sight unseen – to pay the winning bid.

Scripts and Scribes is exceptionally tense for a relatively simple card game. Especially in the first phase of Biblios, you’ll find yourself agonizing over what to do with that next card you drew. Is it good enough to keep for myself? Do I dare let anyone else have it? Should it be dumped to the auction pile where I’ll have a shot at it later?

Decisions, decisions. All of them fun.

Get Biblios at Amazon.

Scripts and Scribes (aka Biblios)