Clans Is One of Colovini’s Best

Clans is a fun board game by designer Leo Colovini, also known for Carolus Magnus, Cartagena, and The Bridges of Shangri-La.

Colovini’s games often feel like abstracts; that is, the theme doesn’t really matter that much. So don’t expect Clans to have much to do with groups of families. 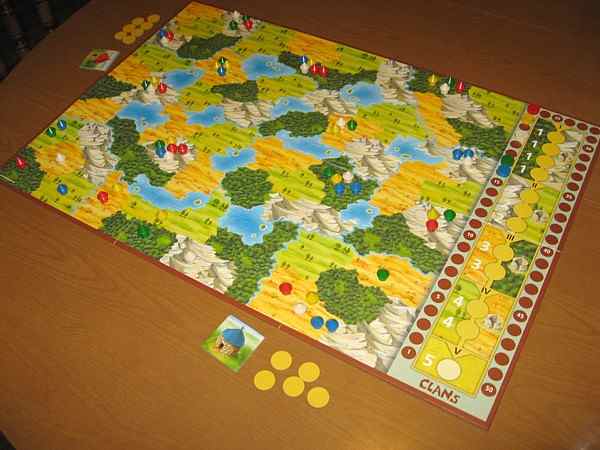 Clans is an area control game of sorts. The game board consists of dozens of distinct land areas, each shown in a different color. At the beginning of the game, there is one hut on each land area. The huts come in five colors and are randomly but evenly distributed across the board.

On your turn, you make one simple move – you slide one hut (or group of huts) from one land area into an adjacent one. If that results in the huts in the new land area being isolated from all the others, you score that land area. Each hut in the area scores 1 point for that color.

But which color is yours? That’s a secret. You see, at the beginning of the game, each player blindly draws a tile showing one color of hut. It’s your goal during the game to slyly get your color to score while not letting on which color that is.

There are a couple more twists to scoring as well. At various times during the game, each land type gives bonus points or prevents scoring, as shown in the area inside the scoring track on the right side of the game board.

When a land area is scored and it contains all 5 colors of huts, any color that has only 1 hut is eliminated and not scored.

Clans is said to be best played as a 2-player duel. It certainly plays differently with 2 compared to 3 or the maximum of 4.

You will enjoy Clans if you like abstract, but colorful, games that only take about half an hour or so to play.

Check the price of Clans on Amazon.

Invite Your Clans to This Fun Board Game