Become a Sushi Master in Wasabi!

I don’t like sushi. At least, I’m pretty sure I don’t. The idea of eating anything raw (other than peas and carrots) that could be cooked just turns me off. Playing a game about raw foods, like Wasabi!

, is a different story though. 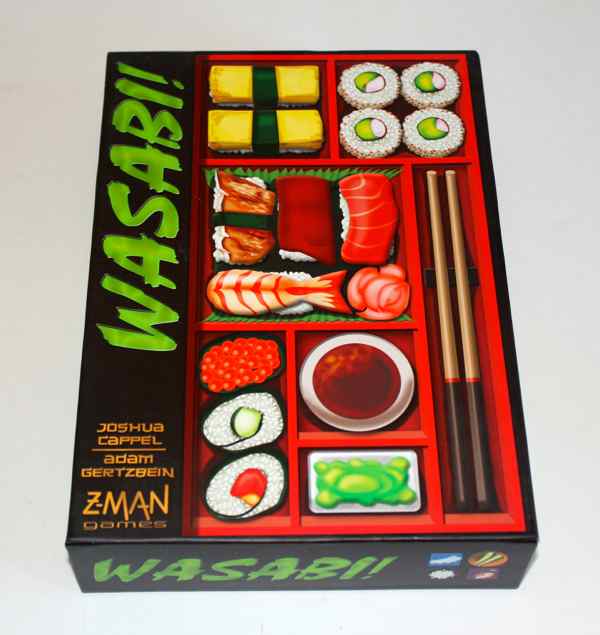 In 2008, Z-Man Games published this game designed by Joshua Cappel and Adam Gertzbein. The general idea is that you play food tiles onto the board in rows and columns to complete recipes that you’ve been assigned. If you do so better than, or more quickly than, the other players, you win.

(And should I have included the exclamation point in that question between the “i” and the “?”?) 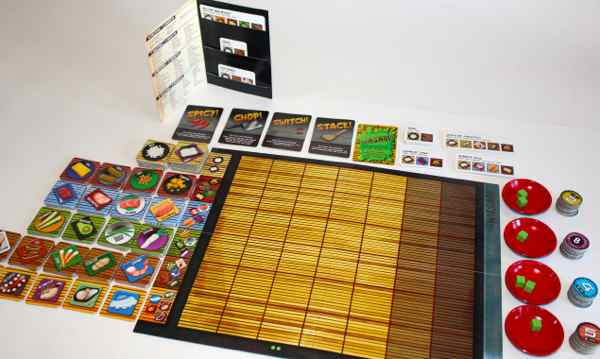 The main board is a grid of squares. You use the lightest colored 5×6 area in a two-player game, add the medium brown column to make a 6×6 square for three players, and the full 7×6 grid for four players.

Next to the edge of the board that shows the 24 different types of food, you lay out stacks of ingredients tiles. You might be able to tell from the picture above that there are varying amounts of each food type. Most importantly there is only one of each of the five tiles in the bottom row. (More on that later.)

Each player will start with a menu holder, a reddish bowl, and an assortment of scoring circles, which the rules call Challenge Tokens. These circles match the sizes of the recipes you will create. On one side you’ll see the numbers from 2 through 5 and the number of green Wasabi Cubes you’ll get if you finish a recipe “with style”. On the reverse, you’ll find the number of points you score.

Other bits in the game are the recipes themselves and five kinds of action cards, two of each type.

How Do You Play Wasabi?

Your recipe holder acts as a screen that hides your bowl (and any cubes it contains), your food tiles, and the recipes themselves. You first take 3 food tiles from the four middle rows only and place them behind your screen. These tiles must each be of a different category (i.e. from different rows).

The recipe card stacks are actually laid out face down (not as shown above and below). You draw any three of these and place them in the slots in your screen. You can choose any three recipes, but it would be useless to take two of the longest ones because you don’t have two five-length scoring circles. 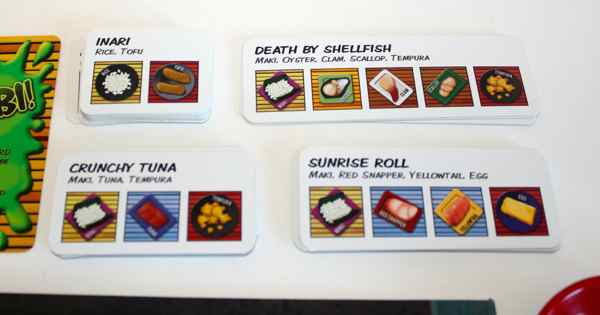 Note that you picked up food tiles before you knew which ingredients you would need to complete your recipes. This procedure is followed throughout the game.

On your turn, you simply play a food tile onto the main board. Normally this tile goes on an empty space, but the Action Cards may change this from time to time. 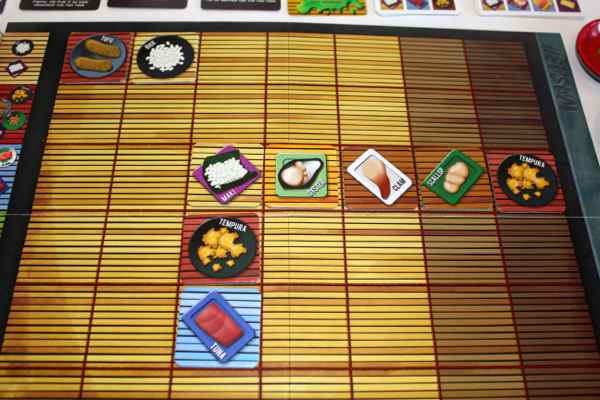 If the tile you play completes a recipe, you remove the recipe from your screen and place the appropriate Challenge Token on top of it for all to see. In the layout above, there are three completed recipes – one of length five, one of length three, and another of just two.

If you complete the recipe in the same order as shown on your recipe card, you have done it “with style” and earn green cubes as shown on your Challenge Token. These are worth bonus points at the end of the game. Recipes of length two can’t be completed with style.

When you finish a recipe, you also get to take one of the Action Cards. These cards are rule breakers that let you do one of the following actions.

No one can place food tiles on a Wasabi card. A played Wasabi card can be reclaimed by anyone who later finishes a recipe.

When Does the Game End?

There are two ways the game can end. If the entire board is covered with tiles or Wasabi cards, the game ends immediately. Players count points for completed recipes and add on green Wasabi cube points. The player with the most points wins. (There are no tie breakers.)

The game can also end when one player uses up all 10 of their Challenge Tokens by completing the corresponding recipes. The first person to do so wins instantly.

Is Wasabi! a Good Game?

When I first played Wasabi!, I wasn’t all that impressed. Maybe I was expecting more from it than it has to offer. However, the more I’ve played it, the more I’ve come to appreciate and like it.

You do need to plan ahead as much as possible. You should also watch what the other players are doing. I mentioned earlier that there are only one of each of the tiles in the last row in the supply. That’s because there is only one recipe of length 5 that uses each of these. Recall also that each player only has one Challenge Token of size 5. If you know what’s in each of these recipes, you know what the person who takes one of these tiles is up to.

The one thing I’m still disappointed with is the recipe holder. It looks really nice, but inserting the recipes into their slots can be a real pain. The slot are not designed very well and can require more work to insert the cards than should be necessary. You would think with all the other wonderful bits (heavy bowls, thick tiles, etc.) they made for this game, they could have come up with a nicer recipe holder. 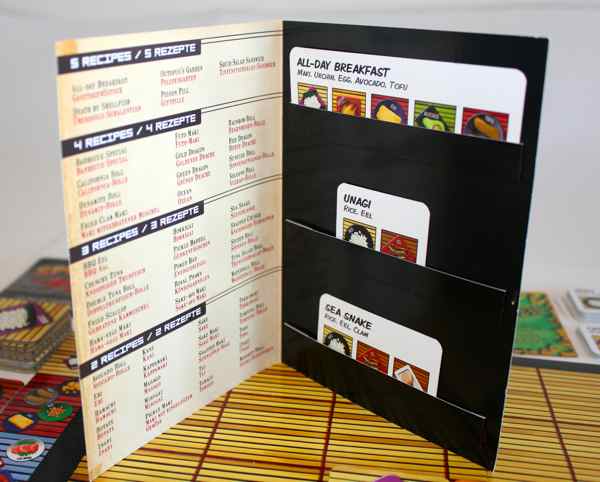 Even so, Wasabi! is a good, fairly quick game that I enjoy and think you will too. If it doesn’t measure up right away, as it didn’t for me, give it a few more plays before tossing it aside. You probably won’t get rid of it after all. I didn’t.