Games that Deserve the Heavy Designation

The five games in the list below are generally considered heavier games – not by actual weight, but by the amount of time and thought needed to compete in them. They aren’t the heaviest Euro games out there, but they’re by far the weightiest of any I’ve listed to date.

All of them are more than five years old, with Timbuktu (or Tombouctou, or Tombouktou, as my version is called) going back to 1993. While Timbuktu can probably be played the fastest of them all, most would consider it the real brain burner of the bunch. It’s got some nicely-crafted wooden camels for the main bits you move on the board. You need some crafty deduction to do well in this game.

Tigris & Euphrates is a classic Reiner Knizia creation from 1997. It is also quite thinky, especially with four players. Getting the rules under your belt takes some doing in this game of struggles among empires, particularly if you don’t get to play it very often (like me). You lay tiles on the board that represent your armies or parts of your empire. When they get near each other, wars tend to break out. That’s when the fun begins.

Tikal is one of many Kramer / Kiesling design collaborations. Downtime while another player is taking his turn can be a problem of sorts here. I’ve seen players complete a different game in between turns of Tikal. The game itself is lots of fun though, just be prepared for some quiet time when you’re not making your moves. You get 10 action points to spend each turn. Since the board changes a lot between turns, you need to take a fair amount of time deciding how to use those action points.

Power Grid and Reef Encounter both debuted in 2004. Power Grid generally seems to be more popular of the two, but both have their merits. Power Grid comes with a double-sided board, which extends its replayability. You build a network of power plants throughout the land. Hopefully you can power more of them than all of your opponents at the end of the game.

Reef Encounter gives you a lot to think about (more than I’ve figured out myself thusfar) and lets you play with cute wooden shrimps. If you manage your coral reef better than everyone else, you’ll have the best shot at being the winner.

About the Number of Players

Expect your first few plays to take longer than the suggested time, since you’re still learning how the game works.

Game: Timbuktu
Players: 3, 4, 5!
Theme: Move goods through the desert on your camel caravans
Genre: Deduce which goods will have the most value at game’s end
Length: 45 minutes
Cost: Check price on Amazon 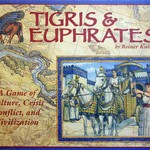 Game: Reef Encounter
Players: 2, 3!, 4
Theme: Use your shrimps to protect your growing corals as they expand and consume those of other players
Genre: Place your tiles and shrimps strategically to consume other corals at the proper time
Length: 90 minutes
Cost: Check price on Amazon

5 Games that Are Heavy Hitters