Time Flies When You’re Having Fun

Did you ever have one of those days at work (or home or school) where you really didn’t have much of anything to do, or at least where you didn’t have any tasks you had to get done before the end of the day? I have those from time to time. There’s not much I can do about it; it just the nature of the business. Feast or famine. Personally, I prefer the feast most of the time. You probably do too.

Time, on the days where there doesn’t seem to be enough of it, just flies by. I think the old saw, “Time flies when you’re having fun,” should be changed to “Time flies when you’ve got something to keep yourself busy.” That doesn’t flow as nicely but is probably more accurate.

That said, a relaxing day is good every once in a while too. It’s tough to go full bore five (or six or seven) days each week.

In the same way, I like lots of fun board games where time flies and you don’t have quite enough of it to get everything done that you want to accomplish. There are many such games, but Agricola in particular comes to mind here.

How many times have you wished for Round 15? We’ve decided however that Uwe (the designer) realized, through playtesting, that 15 was one too many. If you and your opponents each had just a little more time, the game wouldn’t be nearly so enjoyable, tense, and satisfying. You can’t always get what you want and shouldn’t always be able to.

On the other hand, there are fun games that are much more relaxing, either because they aren’t task orientated, so to speak, like Agricola or because there’s a lot of down time in between turns.

Carcassonne doesn’t normally have the down time, but it doesn’t have the same tension as Agricola either. When it’s done, it’s done. It’s usually so relaxing along the way that sometimes we even help each other decide (as the rules suggest) where to place the next tile. 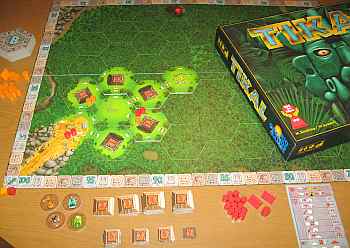 Tikal has a little more of the task feel but there’s so much down time in between turns that you could play another game of something else alongside…and probably finish that one first! The down time comes because you can’t really plan your next moves, how you’re going to use your action points, before the other players have finished their turns. The board simply changes too much from one turn to the next.

I really enjoy all of these games even though they have such different “feels”. If you haven’t played each of them, you really owe it to yourself to give them a go. I think you’ll be very pleased with the results.

Too Much Time on My Hands