How to Play Agricola

In Agricola, your job, as a Medieval farmer and his wife (and later their children too), is to improve and expand your farm by plowing and planting fields, fencing pastures to hold a variety of animals, upgrade and add onto your house, feed your family, and make various other major and minor improvements (cards) for efficiency, value added, and the general well being of all. 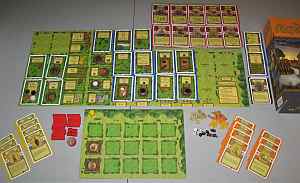 Over 14 rounds and 6 harvests of Agricola, you and up to 4 other players collect resources (wood, clay, stone, reed), gather food (including grain and veggies), plow fields, build fences, erect new rooms adjacent to your 2-room “starter” hovel, employ people (more cards) with occupations other than your own, have babies, and much more.

All of this is accomplished by a very simple action – you place your farmer (or wife or child) token on an action space on the board. If this space has resources, you take them. If it allows some other action, such as plowing, you perform that action.

One catch is that, if a space is already occupied, you can’t go there this round. This brings up some comical thematic problems. For example, if the neighbors are having a baby right now, your family cannot. But no one seems to mind. There’s always next round.

At the end of a few rounds, there is a harvest. At harvest time, you reap some of the crops you have planted, feed your family, and breed your animals. While harvesting crops and increasing your flocks and herds (sheep, boar, and cattle) is important, even more significant is feeding your family. If you can’t feed each member 2 foodstuffs (newborns only 1), you must go begging; that is, you lose victory points.

Harvests in Agricola occur with increasing frequency throughout the game, so it’s vital to find some way to feed your family efficiently early on. Fortunately, you’ll discover that there are several ways to do so.

What Do I Think of Agricola?

The occupation and minor improvement cards come in 3 flavors. There are E, I, and K decks for each. We generally play with cards from all decks, but it works equally well just playing with the E deck, for example.

It’s the great variety available in Agricola that has enticed us to play it over 400 times. I’m sure that total would be well over 400 if we hadn’t discovered one of designer Uwe Rosenberg’s other smash hits, Le Havre, and more recently, At the Gates of Loyang, which you can read about in another post.

Check the price of Agricola on Amazon.

4 thoughts on “Agricola, the Farmer”