Uwe Rosenberg has created three fun board games which have been dubbed the “Harvest Trilogy”. Those games are Le Havre, Agricola, and today’s subject, At the Gates of Loyang. They each have an element involving harvesting grain or other foodstuffs – thus the nickname. 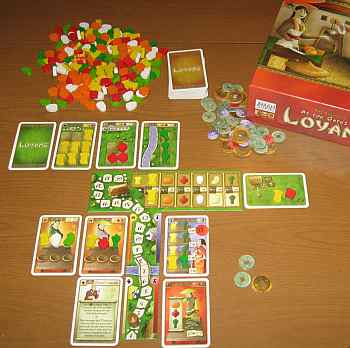 At the Gates of Loyang has one of the more unusually-shaped player boards you’ll ever see. It’s roughly T-shaped and doubles as scoring track and veggie shop.

Your goal, of course, is to move further up the scoring track than your opponents. To do so, you need to earn cash, which is represented by coins with square holes in their centers.

You spend cash each turn to move up the track. Moving one space only costs 1 coin, but moving to the next space (in the same turn) costs the value of that space. Mathematically speaking, it’s actually worth it to spend your cash to move as far as possible.

Games are often very close at the end with ties being broken by cash in hand.

You earn cash by satisfying customers – regular and casual – who visit your shop. Each time you give them the colorful veggies – wheat, pumpkins, turnips, cabbages, beans, or leeks (insert American joke here) –  they require, they will pay you in cash. You get the veggies to sell to them from your shop, from your fields (harvesting them), and from additional market stalls you acquire.

But you don’t have to do this alone! You can employ helpers, who have special abilities and who can allow you to interact with your opponents.

At the Gates of Loyang is not as complex or as long as Agricola or Le Havre. It is the earliest game of the three, and you can see how the other two built on some of the ideas found in this game.

Many games use cards and card drafting as an important facet of play. If you like that in At the Gates of Loyang, you might also like it in Canal Mania.

Check the price of The Gates of Loyang on Amazon.

Enter at the Gates of Loyang

3 thoughts on “Enter at the Gates of Loyang”