Aton Is Fun for Two Players

Aton is a two-player-only game, based in ancient Egypt, that provides multiple paths to victory. You can win Aton by taking control of an entire temple with your counters, by occupying all of the yellow squares or all the green squares in all four temples, or by scoring 40 points. 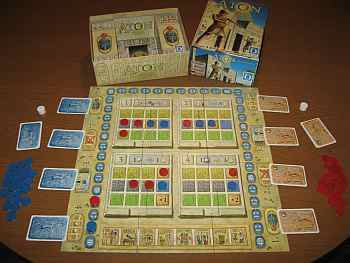 Each player gets a deck of 36 cards with values from 1 to 4. At the beginning of each round, you draw four cards, and assign each to one of the four cartouches along the edge of the board by placing each of them face down in one of those “slots”.

When both players have finished assigning their cards, they simultaneously turn over the card each placed on his first cartouche. If your card is greater, you score double the difference.

Then compare cards on the second cartouche. This card determines which player gets to play his remaining cards first (lowest number goes first), and how many of his opponent’s tokens he can remove. You can remove two of tokens if you play a 4, one for a 3, and zero for a 2. If you played a 1 on your second cartouche, you have to remove one of your own tokens. There are special rules if you play the same number here as your opponent.

The card on your fourth cartouche determines how many of your tokens you can place that round.

If neither player reaches 40 points after the scoring round, play continues with another round. If at the end of your turn you have met one of the winning conditions, the game ends.