Bang! Doesn’t Have to Be Deadly

Do you like the old Western movies? John Wayne and company? Whether you do or whether you don’t, you still might enjoy a Western-flavored card game called Bang! 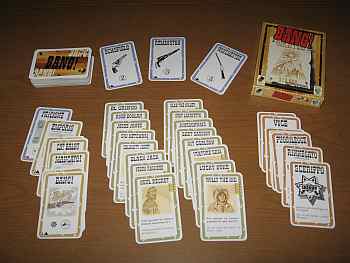 Bang! is a party game for 4 to 7 players that’s probably at its best with the full complement of 7 players. In other words, the more, the merrier.

In Bang! you take on the role of either the Sheriff, Deputy, Outlaw, or Renegade. Depending on your role, which you keep secret pretty much for as long as you can (unless you’re the Sheriff), you have a different goal from most other players in the game. The good guys try to get the bad guys and vice versa. Makes sense, right?

One of the special, possibly unique, facets of Bang! is that it matters how far away you sit from other players. You’ve got a gun to shoot, and it can only shoot so far, depending on its make – Schofield, Remington, Winchester, and so on.

Special cards allow you to do special actions as you might expect.

I said that this game doesn’t have to be deadly. That’s true if you’re on the winning side.

Check the price of Bang! on Amazon.