When you think of ancient Greece, you probably first think of Athens and Sparta, then maybe Corinth, Thebes, and a few other cities. You might ponder the mythology, the gods and goddesses, and the shrines. If you’re really into the study of the times, you might know what an amphora is. But would you ever connect tiles – round and hexagonal and made of cardboard – to it? 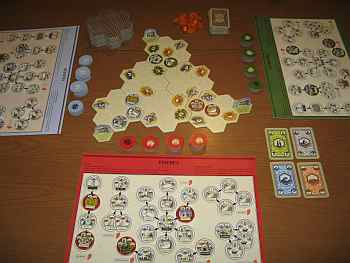 I didn’t think so.

Thankfully, there’s the tile laying game of Attika to help you pull all of these items together in a fun competition, not on an Olympic scale, but one that is thoroughly enjoyable nonetheless.

You start Attika with four stacks of round tiles, a tile mat (named for one of those four Greek cities), and a few resource cards. On your turn, you try to place your tiles on the large honeycomb tiles that make up the main game board to connect two of the shrines located in the corners.

If it becomes impossible to connect two shrines, you need to place all of your tiles before your opponents. Laying tiles requires the resources pictured on each tile. Some of those resources are found on the board itself. To make up for any you are lacking, you play resource cards of the appropriate type, or any two cards as a wildcard.

On your personal mat, the tile spaces are gathered into groups. If you manage to place all the tiles in a group adjacent to each other on the main board, you are awarded an amphora; that is, a vase, which looks more like a carrot or an arrow than anything else. An amphora allows you to take an extra action on your current or on any future turn.

Attika is fun to play with 2, 3, or 4 players. Many claim that it is the most fun and challenging as a two-player duel. I won’t disagree.

Check the price of Attika on Amazon.