In Metro You Actually Want a Long Ride

The Metro is the subway system under the streets of Paris. In the game of Metro you build your own version of the train routes to score points and cut off your opponents’ attempts at doing the same. 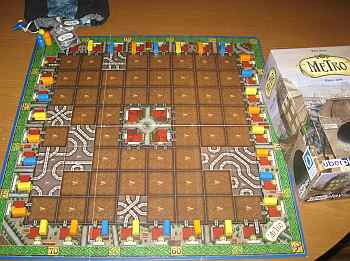 On your turn, blindly draw a tile (drawstring bag shown in the picture not included) and place it on the board. Each tile has an arrow indicating the proper orientation on the board. There is a variation which allows you to ignore this arrow and place the tile any direction you like.

When a route is completed, the subway train attached to it scores points for each section of track along the way. If the route ends in the center of the board, you score double the points.

A major strategy in Metro is cutting off your opponents. You try to keep their routes as short as possible while extending yours to the maximum.

When all the tiles have been placed, the board will be filled and all the trains will have been scored. As in most games, the player with the highest score wins.

Metro is a rather light tile laying game that’s easy to learn and doesn’t take very long to play. It’s lots of fun if you like that type of thing.

One negative is that there is a sort of player elimination. Your routes might all be completed before the end of the game, yet you must still keep playing tiles. Sometimes you may be able to see that doing so will have little to no effect on the final outcome. It almost certainly won’t help you win.

Check the price of Metro on Amazon.

Ride the Metro under Paris