Wordsmiths Will Do Well in Boggle 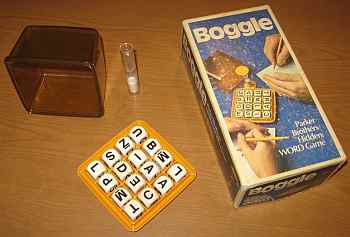 Boggle is a word game, like 25 Words or Less, but you aren’t given the words to play with. You have to create them from a scramble of letters in a 4-by-4 grid. If you play Boggle’s big brother, Big Boggle, you get a 5-by-5 grid.

The letter dice are noisily shaken into a plastic grid to produce a random layout. You then trace a path amongst them to create as many words as you can in 3 minutes.

One of the best ways to do well in Boggle is to anagram simple words. For example, “ate” is also “eat”, “tea” and “eta” (if your house rules allow Greek letters). Longer words score more points, but it usually takes longer to find them which uses precious time that is probably better used writing down shorter, easier words.

Boggle is probably the most fun with 3 to 5 players, though it can be played with as many as can gather around the grid. One of the reasons 3 to 5 is good is found in the scoring. If you and another player both write down the same word, neither of you get to score it.

Your chances of scoring a word decrease the more players your add to the game. If you’re having a party, this is still a fine game to play as long as enough people like word-building.

While Boggle uses 16 letter dice, Aquadukt uses only one 20-sided die. If you’re interested in that type of dice game, watch for my next post.

Check the price of Boggle on Amazon.

Does Boggle Boggle Your Mind?