Say It in 25 Words or Less Easily

Do you remember Allen Ludden and the TV game show Password? When we play 25 Words or Less, it’s a lot like playing Password on steroids. Or maybe playing some sort of Password bonus round. 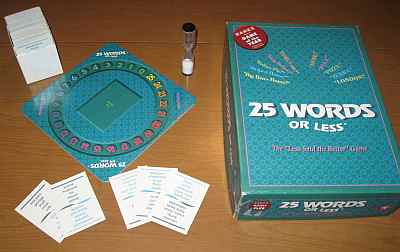 Your task in 25 Words or Less is to get one of your teammates to say 5 words (or names or short phrases) in less than a minute. The catch is that you have previously bid against your opposing team member as to how many words – 25 or less – you are allowed to use as clues.

We often bid down to 5 or 6 words which is what makes it feel a lot like rapid-fire Password time five. You can take your time with the bidding war to try to come up with good short clues – hopefully one-word clues that will lead your teammates to zero in on the correct answer.

There are 275 cards in 25 Words or Less, and each of them has two sets of 5 clues for a total of 550 sets. So you can play this party game for a long time without repeating any clue sets. The most you can use in one game is 19 cards because the goal is to collect 10 cards. If the clue-giving team achieves their goal in less than a minute, they keep the card. If not, their opponents win it.

25 Words or Less may be a little tough to find these days. It has become somewhat of a game collector’s item. It was the GAMES magazine Game of the Year back in 1997.

Check the price of 25 Words or Less on Amazon.