Cribbage is a classic card game that seems to have originated in the 1600s. You play with a standard deck of 52 cards and a special scoring track aptly called a cribbage board. 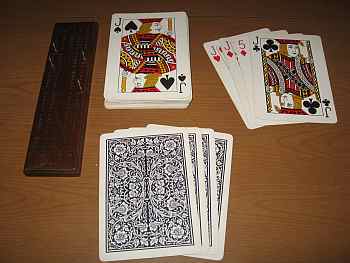 Cribbage is usually played by 2 people but can also be played with 3 (usually using a special 3-track board) and with 4, playing partners.

A full game of Cribbage consists of 121 points, which on most cribbage boards means you go around the scoring track twice. There are larger cribbage boards that have all 120 (plus starting) holes in one circuit.

To start a hand of Cribbage with 2 players, you deal 6 cards to each player. Each player then must discard 2 of those cards into a new hand called the crib. The crib will later be scored by the dealer only.

After the crib has been formed, the non-dealer cuts the deck, and the dealer reveals the top card from the bottom portion of the deck. This cut card is placed face up on top of the full deck and is later used in scoring as a 5th card in all hands, including the crib.

After all cards have been played, the non-dealer first scores his (5-card) hand, then the dealer does the same, and finally the dealer scores the crib. Points are given for pairs, runs, and notably totals of 15. Every combination of 15 scores 2 points. (See the title of this post for an example of how scoring is usually called out.)

Managing your hand of cards is the chief mechanic of Cribbage. You manage what you discard (keeping in mind whose crib it is), the order in which you play your cards, and even how you score your hand. In most circles, missed points can be claimed by your opponent.

Hand management is essential in Cribbage as well as in a card game with an unusual name, If Wishes Were Fishes, which you may wish to check out.

Find a cribbage board at Amazon.