Don’t Lose Your Way to the Lost Cities

Lost Cities is a set collection card game for 2 players from game designer Reiner Knizia. The premise, which is soon lost after you start playing, is that you are going on an expedition to one or more of 5 Lost Cities. 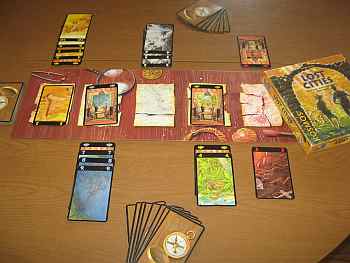 You start with a hand of 8 oversized cards. On you turn, you play a card in one of 5 colors to start or extend an expedition in the play area in front of you, or you discard a card to the game board. Then you pick a card either from the draw pile or a different card from the discard area.

Cards in your expeditions must be played in ascending, but not necessarily consecutive, value. Cards in each color are numbered from 2 through 10. There is only one of each number per color.

There are also 3 handshake cards in each color which must be played before any numbered cards in their color. Handshake cards will later double, triple, or quadruple your score in that color. Be careful though, as this multiplier also works on the negative side.

For each expedition you start, you must “pay” a cost of 20 points. If you cannot play enough numbered cards to make up that 20-point deficit, your score for that color will be negative, and any multipliers will make things even worse.

When the draw pile is exhausted, the hand ends and points are counted. Generally, you play three hands and keep a running total of scores. Scores for a given hand can be very high or very low, so even if you’re far behind after two hands, you’re never out of the running.

Learning how to manage your hand is an important part of Lost Cities. It’s also a significant factor in Cribbage, a classic card game that is the topic of another post.

Check the price of Lost Cities on Amazon.

Lead an Expedition to the Lost Cities

3 thoughts on “Lead an Expedition to the Lost Cities”