Have you seen the dude on the cover of the fun board game Masons? You can get a glimpse of it on the box and the backs of the cards shown here.

Did anyone really ever have a hair style like that? If not, where did the artist come up with that idea? Fortunately, the cover of a board game box rarely has anything to do with how good or how fun the board game itself is. 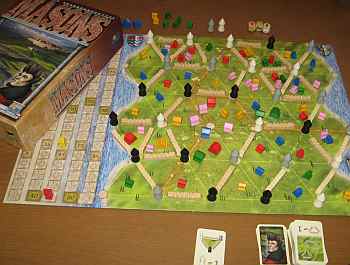 Masons is a hand management game that is also sort of a city building game. First you place a wall on the game board. Then you roll 3 specialty dice – two of them have colored houses on them and the third has towers – to determine which items you get to play on your turn.

If possible, you play a house on either side of your wall that matches the colors on the dice you rolled. You also place a tower – black, gray, or white – matching what you rolled on the tower die, at one end of the wall. You place a second tower in the color of your choice at the other end of the wall.

If the wall you placed completes a city, scoring is possible. You start with a hand of cards that show various scoring criteria. If you like how many points you’ll score by playing a given card – because enough situations on the board match the criteria – play it and move along the scoring track on the side of the game board. Your opponent has the opportunity then to do the same with his cards.

You may also play a second card, if you wish. When done playing cards, you draw just one from the stack. If you don’t want to play any cards, you can draw 2 cards instead.

If, after scoring, you are losing according to the scoring track, you may discard one or more of your cards and replenish your hand from the draw pile.

When a city is finished, if it contains two houses of the same color, they are replaced with a hotel of the same color. Actually, they’re not called hotels, but the Monopoly reference makes it easy to picture and remember.

Masons ends when any one of the supplies of building materials – walls, towers, houses, or hotels – is exhausted. Highest score wins, but you already figured that out, didn’t you?

Check the price of Masons on Amazon.

Dude, What’s with the Hair? Masons

2 thoughts on “Dude, What’s with the Hair? Masons”