Who Is This Odin Dude?

Odin was a god in Norse mythology who had two ravens, Hugin and Munin, who flew around the earth each day and reported back to Odin how things were going. The English form of Odin is Woden from which we get the word Wednesday – Woden’s day. 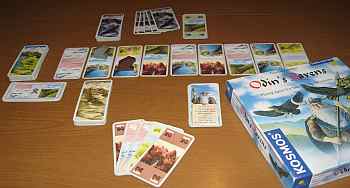 Odin’s Ravens is a fun board game that perhaps should only be played on Wednesdays. 😀

The game board in Odin’s Ravens is made of a row of cards called the flight path. You lay out 12 cards and place the two wooden ravens at one end. The cards each show a pair of landscapes of which there are 4 different types.

You have a hand of cards that match those landscapes and allow your raven to move along the flight path. If you play a card that matches the next space on the path, your raven may advance.

Also in play are special Odin cards that either benefit you or hamper your opponent. One of these cards even allows you to block the path of your opponent with the Odin Marker – a small round token stamped with a lightning bolt.

Then there’s the Magic Way that gives you bonus points at the end of a round, if you have collected more Magic Way cards than your opponent.

When one raven reaches the end of the flight path, the round ends. That player scores the difference in card spaces between the two ravens. The winner is the player who accumulates 12 points after one or more rounds.

Odin’s Ravens is a card and racing game where hand management is very important. Race for the Galaxy is another card game that, even though it has “race” in its name, is not so much about racing as it is about economics and civilization building and is the topic of an upcoming post.

Fly Along with Odin’s Ravens