Race for the Galaxy – A Multi-Purpose Card Game 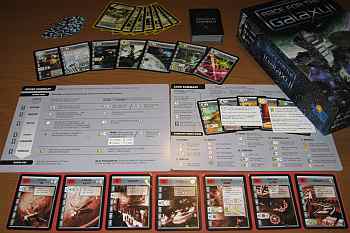 Race for the Galaxy is more complex than San Juan. It has a military element lacking in San Juan and simultaneous role selection not found there either. The trading/selling role in Race for the Galaxy still confuses me sometimes, but I really just need to play it more often to remedy that.

Since Race for the Galaxy is obviously galactic in scope, it makes thematic sense that each card represents a world. You start with one world already in place (on the table) and have a hand of role cards and additional worlds to play. Each world has a cost which is either paid in other world cards or requires a given military world strength to play.

Each round, you and your opponents secretly select a role card. These are subsequently revealed at the same time and then enacted in numeric order (based on a number on the role card) by all players. If a role is selected by more than one player, it is only enacted once.

After each player enacts each role, role cards are brought back in hand, and the next round begins.

The roles themselves allow you to gain more cards in hand, to play Development worlds, to add resources to worlds, and so on. Race for the Galaxy ends when one or more players have played 12 worlds or when the supply of victory point chips (which varies depending on the number of players) is gone.

There is a lot of depth in Race for the Galaxy which isn’t necessarily apparent the first few times you play the game. It takes some time for all the possibilities to surface and for the real fun to begin. If you’re willing to make that investment in Race for the Galaxy, you will be handsomely rewarded.

Check the price of Race for the Galaxy on Amazon.

Race for the Galaxy

One thought on “Race for the Galaxy”