Do You Want to Be the Meuterer?

Meuterer is German for mutineer, so as you might expect, this card drafting game is about a ship, its captain, and rebellious crew. 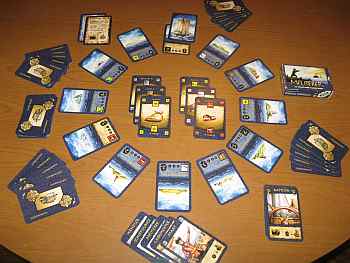 Your ultimate goal in Meuterer is to sell the most goods (for victory points) in each available port where the ship docks. Most island ports can only accept one type of goods: cloth, wine, corn, salt, or rubies.

You can also gain points while acting in some of the various roles: captain, mate, handler, load master, mutineer, or cabin boy. As captain, your card play will determine how far the ship will sail; that is, at which island it will dock next.

In each round, you play goods cards from your hand to the table. When you have played all the cards you want, you secretly select a role card from those available and leave the rest (face down) for the next player to choose from.

When everyone has selected a role, cards are revealed to determine if a mutiny is being attempted; that is, if anyone has selected the mutineer card. If so, the mutiny is resolved, and either the current captain remains in control or that role passes to the victorious mutineer.

Check the price of Meuterer on Amazon.

Mutiny on the Bounty? – Meuterer

One thought on “Mutiny on the Bounty? – Meuterer”