Make Your Way to the Middle in Stadium Checkers

Stadium Checkers is a marble board game played on a “board” with rotating tiers. I think the only reason its called a checkers game is that it uses marbles like Chinese Checkers. 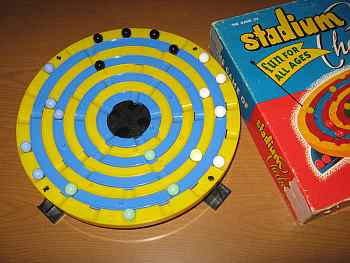 In Stadium Checkers, you place 5 marbles of your color in recesses on the outer rim. Then you specify a marble that you intend to make fall into a recess in the next tier down. If in the process of moving a track you cause other marbles to fall down one or more tiers, so much the better – if they’re yours. If they belong to your opponents, well…try not to do that.

Your goal is to get all five of your marbles into your center hole before your opponents do. If you cause an opponent’s marble to fall through a center hole other than their own, they must restart that marble in the outer rim again.

The first move in Stadium Checkers seems to always benefit one of your opponents the same way it benefits you. After that however, anything could happen.

Stadium Checkers is a strategic logic puzzle. You can generally tell how moving a track will affect everyone on that track and the one above it. You just need to make sure the results help you more than anyone else nearby.

So essentially the fun board game of Stadium Checkers is a race, and it’s simple enough for children to play. Shuttles is a racing game for 2 players that is many ways is like Chinese Checkers and is the topic of this post.

Check the price of Stadium Checkers on Amazon.

3 thoughts on “Now Entering the Stadium…Checkers?”