Mystery of the Abbey – Who Killed the Monk?

Mystery of the Abbey is a deduction board game somewhat akin to Clue. One of the 24 monks who live in the abbey has been mysteriously murdered by a fellow monk. (Not such a nice abbey, eh?) It’s your job to figure out whodunit before anyone else, or failing that, make more intelligent guesses about the attributes of the guilty party than your opponents. 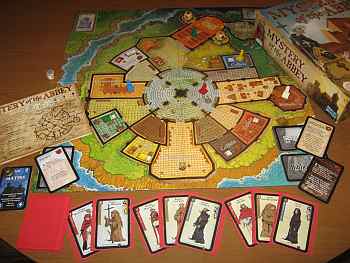 Mystery of the Abbey is played over a maximum of 8 rounds referred to as masses. For the record, we’ve never needed all 8 masses to solve the crime in the 100 games I’ve played.

If you enter a room already occupied by a monk, you must first ask that monk a question. The questionee may choose to answer or may put his finger to his lips and be silent. The big benefit of answering is the right to ask a question in return which must be answered.

There are several special rooms in the abbey which may give you cards with special (sometimes rule-breaking) actions, allow you to ask more questions, add more monk cards to your hand, or allow you to make guesses about the murderer.

At the end of each mass, you pass monk cards from your hand to the player on your left. The number of cards passed increases each round. Eventually you are able to determine from cards you’ve seen and questions answered who the culprit is.

Some have said there is too much chaos in Mystery of the Abbey. We have not found this to be the case. There are similarities to the simpler Clue, but it’s really not fair to compare these two fun board games too closely. Each has its own merits and so will each have their own fans.

Check the price of Mystery of the Abbey on Amazon.

Solve the Mystery of the Abbey

2 thoughts on “Solve the Mystery of the Abbey”