No, you don’t get to blow a trumpet in Trumpet. The game of Trumpet is all about trump. Hence the name Trumpet. 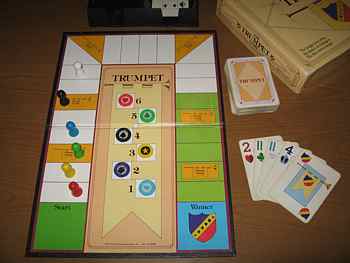 Trumpet is mainly a trick-taking card game that uses a board to track the winner and which trump suit is on top at the moment.

During the course of a game of Trumpet, every suit – hearts, stars, diamonds, clubs, spades, crowns – will be trump. The question is: Which is the most powerful trump right now?

For those who may be unfamiliar with trick-taking card games and the concept of trump, let me explain. Normally, one player leads a trick with a suit of his choice, say hearts. Other players must then follow suit by playing hearts too. The highest numbered heart then wins the trick.

If a player cannot follow suit, he may play any other card but cannot win the trick – unless there is a suit which has been designated as trump. Trump cards beat all others. So if stars are currently trump, even a 2 of stars will beat an 11 of hearts.

In Trumpet, you get to declare which suit is trump when you land on a trump space on the scoring track. Chips matching the card suits are used to show the current highest trump.

If I first declare stars as trump and then you land on a trump space, you can choose another suit, say crowns, as a better trump. Then all crowns will beat all stars. And both of these suits beat everything else.

Eventually all suits have their turn as top trump. When you land on a trump space after that, you switch the position of any 2 chips on the board, where everyone can see the order of the trumps.

What Are the Special Features of Trumpet?

You move your pawn along the track every time you take a trick. But if a space is already occupied by an opponent’s pawn, you leap frog over it to the next empty space.

Near the end of the track are several green spaces. These can be crucial when both your pawn and an opponent’s pawn are on them. At that time, when you win a trick, you have the option of moving your opponent backward instead of moving yourself forward.

And then there are the 3 mega-trump Trumpet cards that beat even the highest trump suit.

Play your Trumpet cards right and you’ll be sure to enjoy trick-taking and leap-frogging your way to victory.

Check the price of Trumpet on Amazon.