Get Five in a Row in Sequence 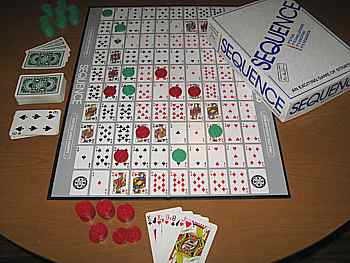 Sequence is a combination card and board game that can theoretically be played with 2 to 12 players, though I wouldn’t really want to play Sequence with more than 4 due to the down time that would ensue with more.

Sequence uses 2 standard decks of playing cards. Although the Jokers are included, you don’t use them in the game. The board is a 10 by 10 grid showing each card in the deck except the Jacks. The four corners do not require a specific card and are open to all players.

Sequence comes with 3 sets of poker chips – red, blue, and green. You only need the third set if playing with a number of players divisible by three.

You start with a hand of 5 cards. Play is simple. Play a card from your hand. Place a chip on one of the two (open) corresponding spaces. Pick a card from the deck to replenish your hand. That’s all there is to it.

Did you know that, in a standard deck of cards, you can only see one eye on some of the Jacks and both eyes on others? It’s true. Go check, if you don’t believe me.

That’s important in Sequence because Jacks are a sort of wild card, and what you can do with them depends on how many eyes are visible.

With one-eyed Jacks you can remove a chip your opponent has played. Two-eyed Jacks are truly wild allowing you to play a chip anywhere.

There’s one feature of Sequence that can catch you by surprise. If you fail to replenish your hand (before the next person has played), you’re just out of luck and must play the rest of the game with fewer choices. Do that a few times and your game becomes severely limited.

Check the price of Sequence on Amazon.