It’s just a card game. Truth. But what a card game! Glory to Rome is a role selection game along the lines of Puerto Rico (not a card game), San Juan and Race for the Galaxy (both card games). 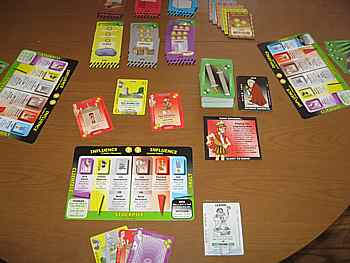 If you’re familiar with any of those games, you’ll notice the similarities when you play Glory to Rome, but you’ll also discover the many differences that make Glory to Rome vastly better than San Juan and Race for the Galaxy and at least as good as the board game Puerto Rico. 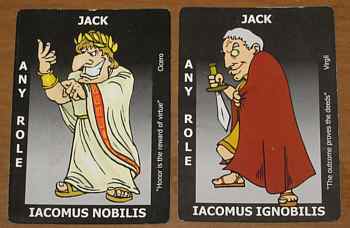 Glory to Rome has 6 Jacks which are wild cards you can substitute for any of the 6 actionable roles. There are also 6 Site cards in each of the 6 colors to match the 6 colors (purple, yellow, gray, brown, red, blue) of the role/structure cards. In other words, everything coordinates extremely well with everything else in Glory to Rome.

There are 5 player mats (Glory to Rome works well with 2 to 5 players) that serve multiple purposes as well. Virtually all the rules are briefly explained on the mat, without using any complicated icons (as in Race for the Galaxy). These colorful pieces of cardboard also

Other bits include the Leader card – very useful – and the Rome Demands piece of cardboard – completely useless. More on these later.

The rule book is well laid out and covers everything you should expect. The multitude of examples of play are especially helpful. And while not every possible scenario is covered, the designers have said elsewhere that, if it’s not explicitly forbidden in the rule book, you should permit the action to be taken.

I like such open interpretation. In my experience, everyone usually agrees on how to play something not covered in the rule book. Glory to Rome is just that intuitive, once you’ve got just a few games under your belt. 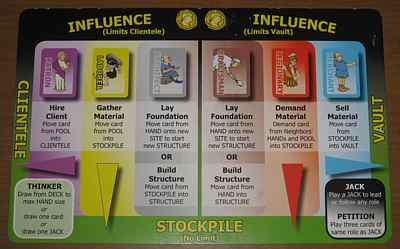 I’ve mentioned the colorful artwork a few times already. Besides the shiny, bright colors, you’ll see cartoonish characters on each Orders card and on the Jacks.

To some, this is a turn off. Don’t let it be one for you. After a couple of games, all you’ll truly notice is the color of the card and the benefit of completing the structure described in the center.

There’s a lot of other information there too.

Most of this card be deduced from the color of the card alone.

Rearrange them a little differently and you’ll notice the following.

Theme in Glory to Rome

I’ll get to the actual game play shortly, but first I want to comment on how the theme permeates this card game especially when uniting structure and benefit of structure completion. The designers seem to have made an extra effort to ensure that the actions allowed by a completed structure fit with the name of the structure as closely as possible.

Take, for example, the Forum. The ancient Roman Forum was a place where many people – all kinds of people – gathered for many reasons. One of the requirement for using a completed Forum structure in Glory to Rome is that you have at least one of each of the 6 types (and therefore colors) of Clients in your Clientele area on the left side of your player mat. See the connection? (More on the Forum later.) Most, if not all, of the others cards show a similar correlation.

So how do you actually play Glory to Rome? The mechanics of play are very simple. 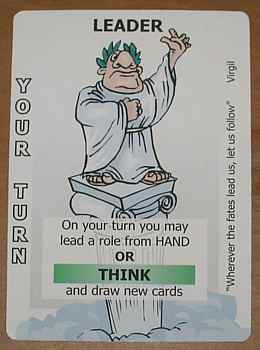 To setup, after dealing 4 Orders cards and 1 Jack to each player, you deal one card face up to each to form an initial Pool in the center of the table. The structure now showing that is closest to the beginning of the alphabet designates the starting player, the first Leader. The white Leader card is used for tracking the starting player for each round.

If your hand is already at 5 or more, you pick just 1 card from the draw pile (or a Jack). If the Leader Thinks, the round ends, and the next player clockwise becomes the Leader. If the Leader Leads, other players in turn may Follow by playing a card of the same role (color) or a Jack, or they may Think instead. When each has decided, the Leader performs the role he selected.

The Patron (purple) allows you to add a Client from the Pool to your Clientele area, as long as the number of Clients there doesn’t exceed your Influence (+2 at the start of the game).

Both the Architect (gray) and the Craftsman (brown) will start structures using other cards from your hand. Later you’ll use these same roles to add building materials to your structures (from 1 to 3 cards, depending on how many coins are shown) in order to complete it and receive its benefits. The difference between these two roles is that the Craftsman requires materials from your hand whereas the Architect takes them from your Stockpile.

The Legionary (red) is the tough guy among action men. He demands, on behalf of Rome, building materials from neighboring players. Here’s where that Rome Demands cardboard bit is supposed to be used. You’re directed to place your hand of cards face down on that bit but turn one your Orders (building material) cards face up on top of the rest and then declare, “Rome demands [insert building material here]!”

That’s the hard way. What we simply do instead is flip around a card for all to see to prove we have it and then make the requisite declaration. (That’s the fun part.) Neighboring players who have a matching material (color) must give you one. In addition, you get one from the Pool if available. All these materials go to your Stockpile just as if gathered by the Laborer.

Finally, the Merchant (blue) “sells” a building material for gold; that is, you flip and move a card from your Stockpile into your Vault. At game’s end, 3 bonus points are awarded to the player with sole majority of victory points for each color in his Vault.

When a round is done, all Orders cards are dropped into the Pool. (Hint: You can stack them by color there to save space.) The Leader card is passed to the next player to begin the next round.

If a player Thinks instead of Following but has a Client of the role that was Lead, that player may still optionally perform that role when it becomes his turn. Similarly any player, who Leads or Follows and has one or more of the same role as part of his Clientele, gets to perform the associated action for each card of that role. Accumulating Clients is very useful, which is why it is limited by your Influence. Fortunately your Influence increases with every structure you complete, which can happen quite quickly.

All of the 40 different structures available in Glory to Rome can be considered rule breakers. They allow you to perform actions (once or multiple times, depending on the card) that the basic rules prohibit. There are at least 3 of each type of structure in the deck – 6 of the cheaper types (yellow and brown).

One of the most intriguing aspects of Glory to Rome is the end game. There are 5 ways to finish the game.

The Forum and Catacombs are threat cards. If you start one, you’re challenging other players to beat you in particular. You won’t finish the Catacombs unless you’re certain you have more victory points than everyone else. On the other hand, you’ll try to complete the Forum at all costs. It’s quite the challenge to thwart a Forum-builder. It can be done, and there are several ways to do so, but you have to play carefully, trying not to play into their hand.

Like many good card and board games, Glory to Rome takes a couple of plays to see all that it affords. Once you realize the depth of play available, it keeps you coming back for more. Glory to Rome is one of only a very few games (Agricola and El Grande being two of them) that I simply can’t get enough of. Besides the depth mentioned, there is an additional benefit in Glory to Rome over a game like Agricola.

Glory to Rome can be completed in half an hour. We often play it twice in one sitting! How’s that for fun?

Find Glory to Rome on Amazon.

Glory to Rome – Best Board Game Made of Cards