Be an Agent of Scotland Yard

Scotland Yard (the real organization) has become famous the world around as a symbol of policing. Likewise, in the fun board game called Scotland Yard, you have to do some nifty coordinated policing to catch Mr. X – unless of course you are playing the role of that criminal yourself. 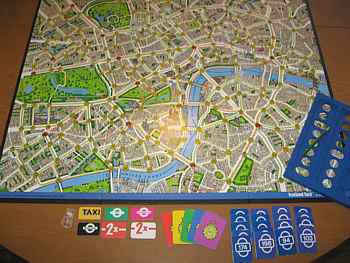 Scotland Yard sports a detailed, cartoonish game board of the city of London. Hundreds of locations are marked with numbers and are connected by bus, taxi, and underground (subway) routes.

All players use corresponding tickets to travel these routes. Mr. X travels them in secret, hoping to avoid capture. The band of policemen (or women) travel them in an attempt to corner and precisely locate Mr. X before they run out of transportation tickets.

In addition to moving secretly, Mr. X has some other tricks up his sleeve. He has 2 double move markers and 5 black tickets to camouflage his movements. Wise use of these “secret weapons” is often the difference between getting caught and going free.

Twice during this fun board game, Mr. X can use 2 tickets to escape his potential captors. If used in combination with a black ticket or two, Mr. X can easily be anywhere on the board at the end of his turn. Five times during a game of Scotland Yard, Mr. X can hide his method of transportation by using the black tickets. 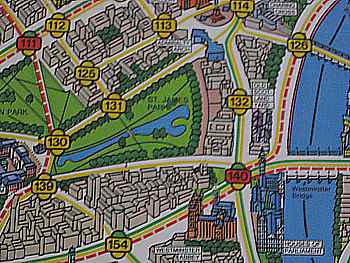 Five times Mr. X must reveal his position to the police. Where he turns up is frequently quite a surprise to the police force.

The police can make educated guesses as to his whereabouts while he’s in hiding, but the possibilities often increase exponentially after just a few moves. Capturing Mr. X and Mr. X escaping capture – even when pursued by a force of five – are both possible in this game.

The police, who start on random spots on the game board (as does Mr. X), are encouraged to discuss tactics amongst themselves during play. Perhaps some of the force want to try to corner Mr. X in the section of town they believe he’s hiding while one or two officers hang back in another part of the city in case he slips through their dragnet. 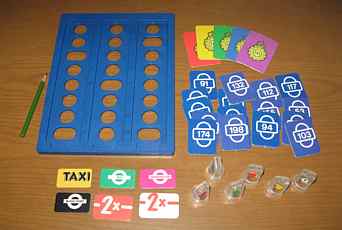 Mr. X tracks his travels secretly in a log book – a plastic grid with spaces for used tickets. If at the end of any turn an officer is on the same spot as Mr. X, as recorded in the log, the game ends with Mr. X in custody and the police claiming victory.

If Mr. X can elude his pursuers until they are all out of tickets (or can no longer move using the tickets they still possess), Mr. X goes free and wins the game.

Scotland Yard is easy to understand and fairly quick to play. You can always find someone up to the challenge of playing the evil Mr. X and plenty of others who are willing to gang up on him. Scotland Yard can be played with as few as 3 players (2 policemen and Mr. X) or as many as 6 (Mr. X and 5 officers).

Scotland Yard the board game has been around for decades (since 1983). You may also be able to find it for your iOS device (iPad or iPhone).

Check the prices of Scotland Yard at Amazon.

Scotland Yard as a Board Game