Colosseum combines several simple steps in order to provide players with a deep and engaging experience that has plenty of replay value. 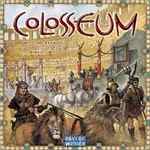 In Colosseum, players take the role of “event planners” of sorts, that are trying to produce the biggest and grandest spectacle to please the Emperor and other Roman higher-ups. The game contains 30 different spectacles that players can produce. Some they start with at the beginning of the game; others they have to buy.

At the end of each of five turns, players have the opportunity to put on a spectacle and earn points and money equal to the number of spectators they draw into their colosseum. They use this money to buy greater spectacles, buy performers for their spectacles, and buy other items that help attract spectators.

Each turn has five phases, and each player does each phase in turn before anyone moves on to the next phase.

The first phase is investing. You can either purchase a new event, an expansion for your colosseum, a season ticket that guarantees more spectators, or an emperor’s loge that gives you a better chance of attracting the emperor, consuls, and senators.

The second phase is an auction to purchase performers from the market. Players want to purchase the performers that are necessary to put on the events that they already have in addition to preparing for future events. Additionally, if a player collects at least 3 of a given performer and have more of that performer than any other player, they are granted a Star Performer that helps attract more spectators.

The third phase is trading. Players take turns trading money and performers with all the other players. This can help to procure any performers that, perhaps, were unavailable during the auction phase. 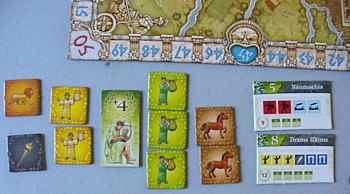 The fourth phase is producing an event. Players have the opportunity to move the emperor, consuls, and senators and hopefully get them into their colosseum. They then count how many spectators there are at their event.

Each event has a given base number of spectators. If the player failed to acquire all the necessary performers for the event, points are subtracted based on how many performers they are short. Spectators are added if a higher-up is in your colosseum, if you have any season tickets, if you have already produced any events, and if you have any star performers.

The game repeats for five rounds and the winner is not the player with the most total spectators in all their events combined, but rather the player who put on the single greatest spectacle. This is an interesting mechanic that forces players to always be looking ahead and not be wasting their resources.

Colosseum is easy to learn, and even a newcomer has a chance to take down a seasoned veteran. Each game is very different giving it plenty of replay value.

It may seem like there is a lot going on in Colosseum, because there is. However, the phases help to make decisions easier by breaking them down into simple steps. Colosseum is very balanced and gives players the opportunity to make a comeback and put on the grandest spectacle on the last turn even if they were behind the whole game. With 30 different events to choose from, each game is different, challenging, and above all, fun.

Colosseum for the Rich and Famous (in Ancient Rome)