Neuroshima Hex! is a quick-playing abstract war game that probably appeals more to the geekier crowd than to your average game player, but packs plenty of replay value into a small amount of components. 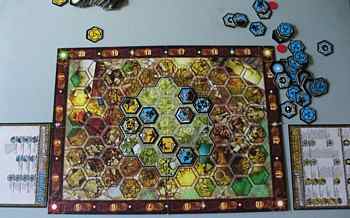 In Neuroshima Hex!, you take control of one of four armies that each have a unique set of units in the form of small cardboard hexes. You start with simply a home base which you are trying to protect while simultaneously trying to take down your enemies’ home bases.

On each turn, you draw three tiles. One of these tiles must be immediately discarded. For the other two, you have the option of either immediately placing them on the board or saving them for a later turn. If you save any for a later turn, however, you do not get to draw three new tiles on your next turn; you simply draw enough so that you, once again, have three to choose from.

The majority of the tiles are simply units that do at least one of three things: attack short range, attack long range, or “net” your opponents. When these tiles are placed, there are no immediate effects.

Another type of tile helps increase the strength and abilities of any tiles adjacent to it. There are a few other types of tiles unique to each army, but the last type that I will mention are Battle tiles. Battle tiles are not placed on the board but, rather, are simply used.

When you use a Battle tile, a battle commences. (Go figure!) Each of the unit tiles on the board has a number on it. This number can be increased by supporting tiles adjacent to it. All the tiles with the highest number attack simultaneously.

Following this round of action, all the tiles that have the next highest number attack simultaneously. This process repeats all the way down to tiles numbered zero.

If, in the course of battle, one of the player’s bases in destroyed, that player is removed from the game along with all their units in play.

The game ends when only one player is remaining or when one player has no more tiles to play. In the latter case, whichever player’s base has the most hit points remaining is the victor.

Neuroshima Hex! is a game that you can play in half an hour or less. It’s a fun filler that doesn’t get old quickly, but if you’re not into confrontation, abstract games, or fantastical themes, Neuroshima Hex! may not be for you.

Neuroshima Hex! is a fast-paced light war game that works well with 2-4 players. This fun board game offers several different starting scenarios that you can try to spice up gameplay. Additionally, the variety and uniqueness of each army as well as how a given player uses that army, help to add variety to each new game.

A Board Game of Variable Powers – Neuroshima Hex!