Shadows Over Camelot is a easy to learn but difficult to beat cooperative game that is rich in theme, has beautiful artwork, and always keeps players guessing with the possibility that there is a traitor in their midst. 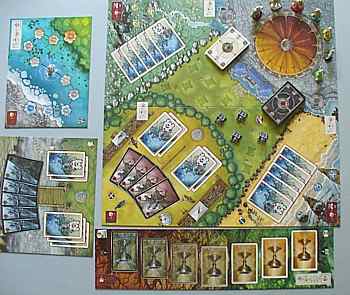 In Shadows Over Camelot, players each take on the role of a knight of the Round Table (or even King Arthur himself). Each knight has a different special power that can be used each turn.

Players must work together in order to defend Camelot as well as complete a number of other quests. For each quest that is successfully completed, the knights will gain a few spoils of victory, and most importantly they will get to add white swords to the Round Table. However, if an attempted quest is unsuccessful, knights will lose life points and black swords will be added to the Round Table.

There are several ways to lose, but only one way to win Shadows Over Camelot. If, at the time the twelfth sword is placed on the Round Table, there are more white swords than black swords, the knights are victorious. 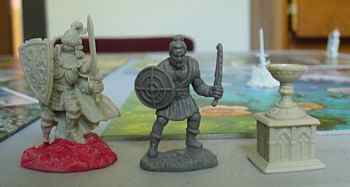 Along the way, the knights can gain various relics, by successfully completing the corresponding quest, to help them in future quests. These relics are Lancelot’s Armor, Excalibur, and the Holy Grail.

There is always a possibility that there is a traitor in the midst of the knights. At the beginning of the game, each player draws a card from the deck of 8 loyalty cards. Seven of these cards inform the knight that he is loyal; one reveals that he is the traitor. There will always be more loyalty cards than there are players, so one can never be certain that there is a traitor at all. 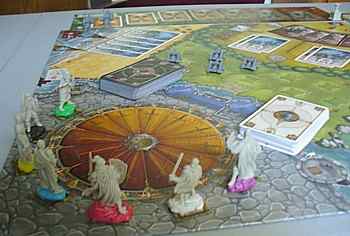 A knight can accuse another knight of being the traitor, which forces that player to reveal their loyalty card. However, if the knight falsely accuses another player, a black sword is added to the Round Table. To make it even trickier, if there is a traitor that goes unaccused even at the end of the game, he reveals himself and flips two of the swords from white to black, possibly shifting the outcome of the game at the very last second.

The theme and artwork in Shadows Over Camelot are both well done. The traitor aspect makes every game unique because the player who saved the day in the last game may be the traitor this game.

Shadows Over Camelot works with 3-7 players but it is best with 5-7. You may find it difficult to get that many people to the table regularly.

With the traitor aspect included, Shadows Over Camelot is elevated from a fairly fun cooperative game to an engaging battle between the forces of good and evil. You never know who you can trust, but you must at the same time work together in order to achieve victory.

Get Shadows Over Camelot on Amazon.

Board Games in the Shadows over Camelot