In Galaxy Trucker  (Amazon link) you scramble to build a ship that will (probably) quickly get blown to pieces. It is a lot of fun if you can stand to watch your semi-carefully crafted work get destroyed before your very eyes. 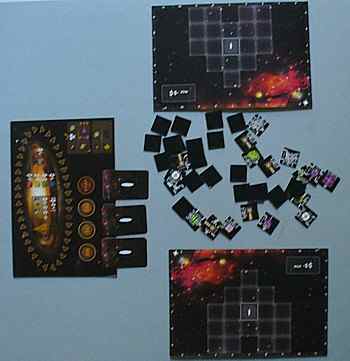 You play are a trucker paid to literally haul a pile of junk across the galaxy.

But you’ve been thinking.

Rather than throwing all the junk into your “truck” and carting it to the other end of the galaxy, it would be better for you to just build a ship out of the junk and fly that around instead.

In the first phase of the game, you grab pieces of ship from a large facedown pile of tiles in the middle of the playing area.

You try to fit as many lasers, engines, shields, batteries, cabins, and cargo holds onto your ship as possible, but your board has a limited amount of space. Also, you have to make sure everything connects properly.

When someone finishes building their ship, they flip over a sand timer. The other players must try to complete their ships before the timer runs out. 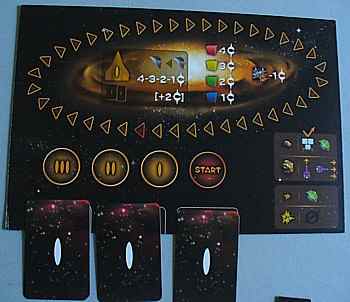 Now that your ship is built, it’s time for you to fly it across the galaxy. Sounds easy enough, right?

Along the way, there are abandoned ships and stations, smugglers, meteors, pirates, slavers, combat zones, and the like. You have to avoid them.

Most of the obstructions (which are cards) will reward you with goods and money if you manage to defeat them. If you fail – and you often will, you will probably lose a tile from your ship.

The tile you lose just might be the only one connecting two sections of your ship. Lose the tile, lose a whole section of your ship and anything that was in it.

Once you make it through the obstruction cards, you land and score points for the order you landed in. You also get points for any cargo you may have accumulated (and didn’t lose) along the way.

Rinse and repeat, with a slightly larger ship. Then do it again in round 3 with an even larger ship.

Since the junk pile is the same size every round and everyone is building a bigger ship each time, you have to settle for lower quality components as you progress.

When all three rounds are done, the player with the most money wins.

One aspect of Galaxy Trucker that’s different from many Euro games is that there is almost more skill (dexterity and logical) involved than strategy.

When building your ship, it helps to look at all the tiles that everyone has flipped over. That way you can see which tiles will best fit your ship.You could strategize all you want, but if you aren’t quick and able to see that the tile you need is sitting in front of your neighbor, your strategy will do you no good.

You could strategize all you want, but if you aren’t quick enough to see the tile you need is sitting in front of your neighbor – no longer availble to you, your strategy will be useless.

Gameplay in Galaxy Trucker is extremely fun for new and experienced players alike. Though experience with the tiles can be an advantage.

The game is humorous and the rulebook is well-written and funny. There is a learning curve, but after a couple games, everyone should stand a fighting chance.

Even if you aren’t able to build as “good” of a ship as your neighbor, it’s still a lot of fun to go through the process and watch as the cards wreak havoc on everyone. Just realize that your ship is going to get destroyed and have fun with it.

The more skilled player may be the one to lose half his ship when a large meteor strikes. Then you swoop in to steal the victory from him!

Get Galaxy Trucker on Amazon.