But that makes it lots of fun.

Dungeon Lords is a resource management and worker placement game that is on the heavier side, to say the least. Yet it is dripping with so much theme that even non-hardcore gamers will enjoy it. 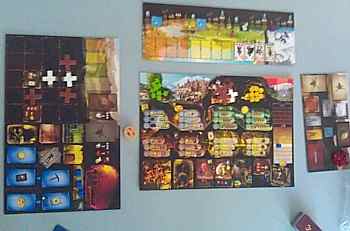 In Dungeon Lords, you are a Dungeon Lord. You get your dungeon ready to battle some pesky adventurers who have the habit of showing up when you want them least.

You add tunnels and rooms to your dungeon and buy monsters and traps to make the do-gooders tasks as difficult as possible.

Every round, you select 3 action cards from your hand. You place them facedown on your player board and reveal them one at a time.

The actions are these. 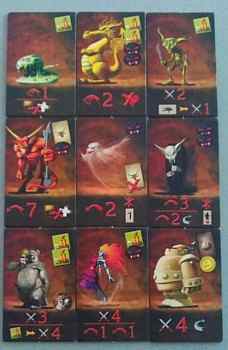 There are several caveats to be aware of when placing your action cards.

1) The 2nd and 3rd actions will not be available on your next turn. So plan ahead.

Each action card has a corresponding space on the main board, and each of these locations has only 3 spaces for workers.

Each of the 3 spaces associated with an action has a different “offer”. The player who gets to put his worker on the 3rd space usually gets the best offer.

But if you try to get that last spot, the trade-off is that you’re not likely to be able to select that action again on your next turn. That’s because you probably had to make it your 2nd or 3rd choice this turn, which means you won’t get that action card back next turn.

On top of that, it possible that other players will fill up all 3 spaces on the board before you even get there!

2) In addition to all that worker placement maneuvering, you have to balance the collection of resources: Gold, Food, Imps, and Evilness. The most important of those just might be Evilness, or Evil “Points”.

This is where the Evilometer, mentioned above, comes in. All players start with the same amount of Evilness on the meter. As you do more evil things (Remember, you are a Dungeon Lord.), you will move up the meter. Conversely, if you do good things, you’ll move down.

Several times during the game, you will have those adventuresome pests enter your domain to try to conquer you and your dungeon.

They will have different strengths and abilities. The strongest ones will go to the Dungeon Lord who is highest on the Evilometer. If you get really, really evil, you might be attacked by a very strong Paladin in addition to the normal adventurers.

You play the game over two years’ time. Each years is divided into 4 seasons.

Each season is a turn in which you prepare for the eventual arrival of the adventurers. At the end of the year, they arrive, and you do battle.

You will score end game points for having monsters, captured adventurers, and rooms in your dungeon. You can get more points for being the Most Evil, having the Most Imps, the Most Monsters, and other titles. Most points wins. 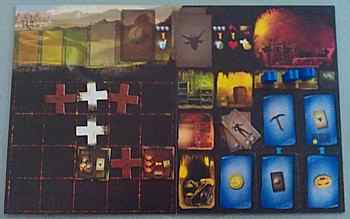 The theme in Dungeon Lords is about as rich as you can get without it being a simulation.

The game is very challenging and surprisingly humorous. Even the rulebook, which is well-written, is hilarious.

Dungeon Lords is designed for 4 players and plays best with that number – much like El Grande works far better with 4 or 5 that anything less.

Dungeon Lords actually suffers when there are less.

You are going to make many mistakes during your first couple of games (and maybe more, if you’re like me). A more experienced player can and should take advantage of those mistakes.

Once you get the hang of it though (and maybe even before), you’ll find yourself having a wonderful time being evil for a change.

Lords of the Board Game Dungeon