Army vs Aliens – You Get to Decide

Army vs Aliens is a game of dice for 2 players. One player is the Army; the other is the Aliens. Each has a supply of 9 dice showing 6 ranks of people, creatures, or weapons. The lowest 4 ranks on each side are of equal power.

On the Army side, that’s the Troopers, Artillery, Tanks, and Airplanes. On the Aliens side, that’s the Invaders, Death Rays, Landers, and Saucers. The upper 2 have different powers and effects, thus making this a slightly asymmetric battle. More about them later. 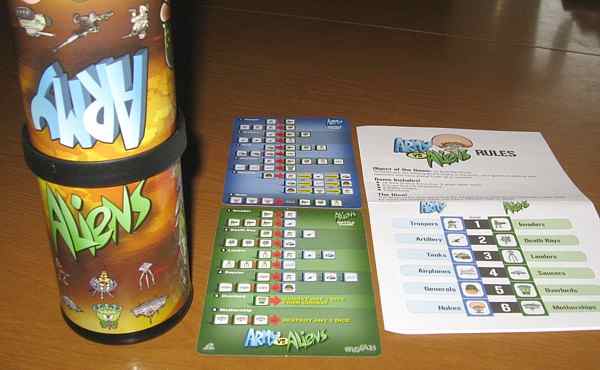 The storage mechanism for the dice is wonderful. Put each set of dice in its cup; snap the lid on one of them; then snap the other cup to the other side of the lid. The high-quality dice and decent graphics are much appreciated too.

To start Army vs Aliens, both players roll all their dice and arrange them in rank order for easier play. The Army attacks first. For the lower 4  ranks, a die in a given rank can take out 1 opposing die of the same or lower rank. The attacking die is set aside for re-rolling (known as Rallying) on a later turn. The defeated enemy die is captured and essentially removed from the game. You keep it in your scoring area in case of a tie at the end of the game.

If either side has 3 dice of the same rank, the owner can set aside all 3 to destroy 1 die of the next higher rank in the opposition. If you can manage such an attack, it is an excellent move to make. Not only does it take out a higher ranking die, but it also preserves 3 of your own dice for future use and prevents the enemy from attacking any of them immediately.

After the Army’s initial attack, the Aliens take a turn to do the same. Play then alternates with players either destroying more dice or pausing to re-roll all of the dice already used in an attack plus any still available for combat. 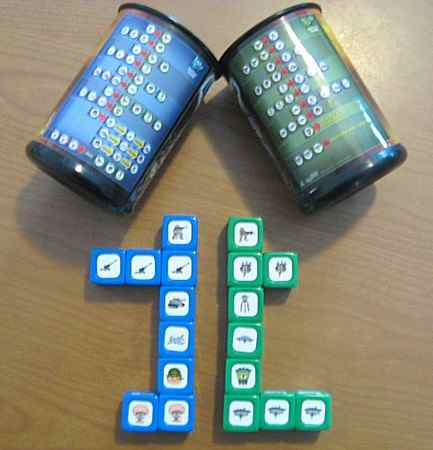 On the Army side, the 2 highest ranks are General and Nukes. You use the General to promote everyone in one of your 4 lowest ranks to the next higher rank. You must have at least 3 Nukes to drop them, but when you do, you obliterate all dice in the lowest 3 ranks on both sides of the battlefield – a move best made when the Army doesn’t have any there.

On the Aliens side, the 2 highest ranks are Overlord and Mothership. Use the Overlord to remove (but not destroy) any 2 enemy dice from combat. If you have at least 3 Motherships, you can use them to wipe out any 2 Army dice still in combat.

The winner is the commander who first annihilates the entire enemy force. Failing that, the game ends when 5 rounds pass with no attacks being made. The winner is then the player who destroyed the most dice. If that number is equal, you add the rank values of each as victory points with the higher total awarding the victory.

As in many dice games, rolling high or rolling multiples of the same thing is good. Army vs Aliens could obviously be played with normal sets of differently-colored dice, but it wouldn’t be nearly as much fun. The heavy specialty dice feel good in hand and roll well when spilled from the cup. There’s enough strategy possible to keep the game from being boring. It’s admittedly very light (plays in 15 minutes), but that’s great for a filler if you want some fast battle action and have little time or need something between heavier games.

Check the price on Amazon.

Army vs Aliens – Nuke Those Dice