WYPS Is Easy to Learn

WYPS is a fun word game for two that may look a little like Scrabble but is much more interactive.

The name WYPS is based on two facts. This is a word game, so it starts with a W. It’s similar to the game called Y, and the letter Y is spelled YPSILON in some languages. So take the W plus the first three letters of YPSILON and you get WYPS. Unusual, but true. 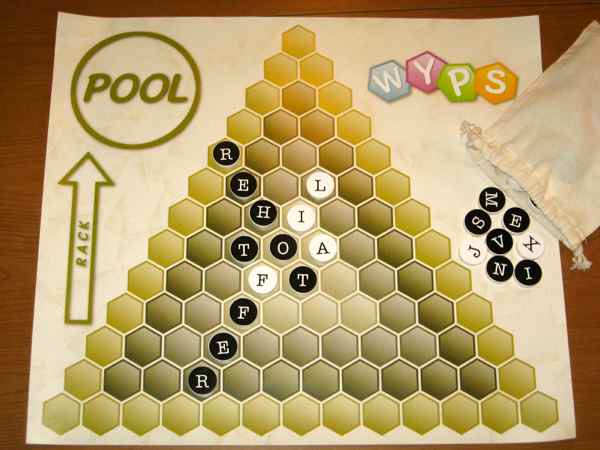 The game is played on a triangular board. You can vary the size of the board to alter the length and the complexity of play. The largest board has 13 hexes on a side.

Each player starts with a supply of 7 circular tiles. Each tile has the same letter on both sides – one black on a white background and the other reversed. One player uses all black letters; the other uses all white.

Your turn consists of playing one or more tiles to spell a word. The letters need not be played it a straight line. (Think, Boggle.) After the first player’s first turn, his opponent incorporates one or more of the letters already on the board when spelling a new word. He can then flip over one used letter to his own color. If however his play was in a straight line, he can flip all the letters in his word that were of the opposing color.

Your goal is to have an uninterrupted chain of letters in your color that connect all three sides of the triangle. Corners count as both adjacent sides and so can be extremely important to control. If, after you have connected the three sides, your opponent cannot break the chain, you win.

The board, bits, and bag are all of good quality. The board rolls up instead of folding, so storage can be awkward due to its size.

Where to Get WYPS

As of this writing, WYPS is only available from eastern Europe, so shipping to the USA is expensive and delivery can take a long time.

WYPS adds the element of attack to an otherwise mild genre of game. In fact, connecting the three sides is called an atari. Playing a word may be easier than in a game like Scrabble, but it’s much more important to consider where you play it and whether or not you play it in a straight line. If you like these strategic features in your word games (and why wouldn’t you?), try WYPS.