Synonyms Looks for the Same Old

Synonyms is a word game in which you unsurprisingly have to come up with synonyms for a word you’re given. What is surprising is how difficult this can be under pressure. 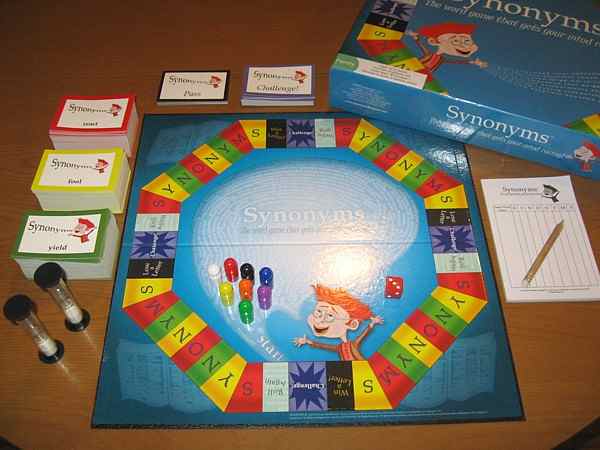 The basics of the game are simple. You roll a die and move your pawn around the board. If it lands on a letter, you have one minute to come up with as many synonyms as the number you rolled.

Your starting word is on a card that matches the color of the space you landed on. Red cards supposedly contain more difficult words. Green cards are the easiest, and yellow are somewhere in between. I’m not sure how the designers decided which words go where. They are all pretty tough when you need to name 6 of them before time runs out.

If you achieve your goal, you are awarded the letter on the space your pawn landed. Four sections of letter spaces spell the word SYNONYMS. It is your ultimate goal to collect one of each of those letters. Yes, there are 3 pairs of letters there. The only single letters – the O and the M – are both on red spaces making them by far the most difficult to collect. I’m not sure why they decided to color the letters the same in each of the four sections on the board.

There are a few other spaces on the board besides the letters.

There is the useless “Roll Again”. Why it’s there, no one knows. Surely they could have made better use of the space or eliminated it completely.

The “Lose a Letter” space forces you to do just that – remove a letter from your tally on the score pad. At least you get to roll again and try to gain a letter back. It might not be one you need, but it’s better than nothing – assuming you win it.

The “Win a Letter” space gives you a letter for free. Unless you already have them, you’ll choose the O or the M.

Landing on a “Challenge” space gives you an extra Challenge card (not a letter), if you can name the required number of synonyms for a card chosen by your opponent. Guess which color of card they’re going to choose.

Besides synonym cards, there are Challenge cards and Pass cards. You start the game with 2 of each. The use of each is a little sketchy.

Pass cards are not used to bypass a difficult word. Instead, if you fail to name enough synonyms, you hand in a Pass card to try a new word (while on the same space) or roll again.

Challenge cards are used after an opponent has attempted to name their synonyms. Tossing down a Challenge requires you to name another synonym within one minute. The challenged player(s) then have another minute to do the same. And so it goes back and forth until someone can’t give another one.

It’s unclear whether these cards can be played only after the original attempt failed, succeeded, or both. Keeping track of the one minute limits can be tough even with the 2 sand timers provided. I would suggest not using them during a challenge unless someone appears stuck for a new synonym.

If a challenge goes on for many rounds, it can be hard to remember whether or not a synonym was named earlier. You might want to write them down.

On the backs of the synonym cards are lists of valid synonyms, but you are not limited to these answers. This can prove to be a tricky situation when a questionable synonym is given. Consensus is not always possible, and coming to it can take up valuable time. Multi-word phrases and slang are allowed. When is it an acceptable synonym as opposed to a definition?

Also, you shouldn’t look at the lists until later because you may want to challenge for the letter, and it would be unfair to have seen the list before issuing the challenge.

As I hinted at earlier, giving several synonyms – even for a green card – can be rough when you only have 60 seconds to do so. Even 3 synonyms seems like a lot – even for well-read, educated people. This game could be very frustrating for young people. You can’t really use it to educate them either because, if you don’t know more synonyms, you simply don’t know more synonyms.

The score pad could have been designed better. There is a column for each letter, but it’s awkward to use if you get more than the number required. And you will want to keep track of every letter you win because you might land on “Lose a Letter” and will want to know which one you can safely scrap. You’ll also want to draw in some horizontal lines to distinguish between players.

The box insert holds each component of the game in its own compartment except for the score pad (and you could say the board itself). Normally this is a good thing, but the stacks of cards are nearly impossible to remove from their slots unless you rubber band them. (Some people really hesitate to band their cards, but I wouldn’t worry about that with these, since the quality isn’t very high.)

Synonyms could be a good game with a few tweaks. As is, you have to know a lot of words or roll very low numbers to be successful and have any fun. In my experience, Synonyms turned out to be more of a chore than a game. It didn’t get my mind racing. More often it froze it placing a mental block firmly in the middle of the road. But as always, your mileage may vary.

Get Synonyms at Amazon.

Synonyms – the Board Game that Gets Your Mind Racing