Hey! That’s My Fish! is just another way of saying, “Stay off my ice floe!”

This might at first sound and look like a kids game, and fairly young children certainly can play it. But there’s really some nice strategy you can employ here, along with some good tactical maneuvers. This makes it enjoyable for adults as well.

Here is the initial setup for a 4 player game. 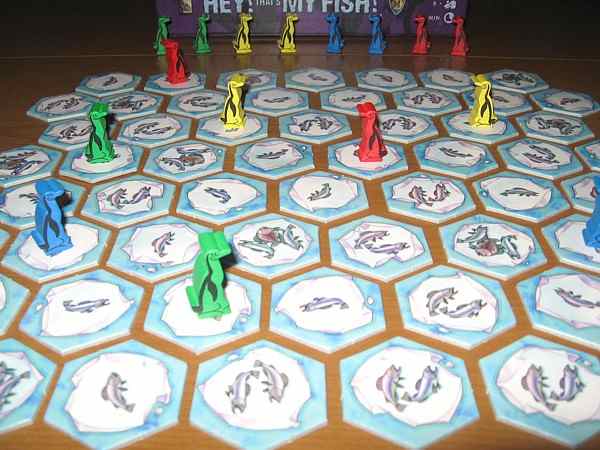 It can just about take more time to setup than to play.

You lay out the hex tiles in alternating rows of 7 and 8, leaving a little space between. This is because you’re going to be picking up pieces from the center early in the game. The space prevents you from messing up the rest of the tiles with your fingers. 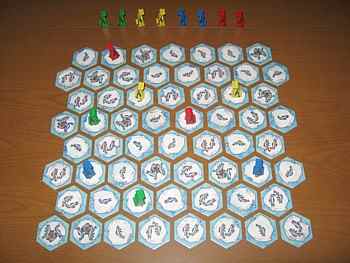 Each tile shows either 1, 2, or 3 fish. At the beginning of the game, you take turns placing your penguins on a tile with just 1 fish.Each fish is worth 1 victory point.

On your turn, you move your penguin off its current tile in a straight line as far as you want. You have to stop before you bump into another penguin or come to an empty space; that is, the table.

You pick up the tile you just left. That tile adds to your score. At the end of the game, each fish will be worth 1 victory point. 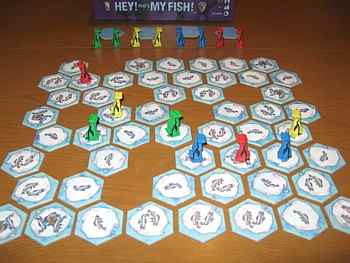 You try to keep your penguins moving as long as possible so they can continue to collect fish.

Sooner or later, you’ll be stranded on a tile, unable to go any further. This will happen either because there are no more adjacent tiles or because other penguins are on them, boxing you in.

When everyone is stuck, you count up the fish on the tiles you collected, and the player with the most fish wins.

The sequence of pictures below shows a sample game of Hey! That’s My Fish!

There were 2 moves between each picture, except the last two.

Hey! That’s My Fish! Stay Off My Ice Floe!