Avast, me hearties! If ye be ready for a swashbuckling good time, ye shall mightily enjoy the fun board game that be called Rum & Pirates. 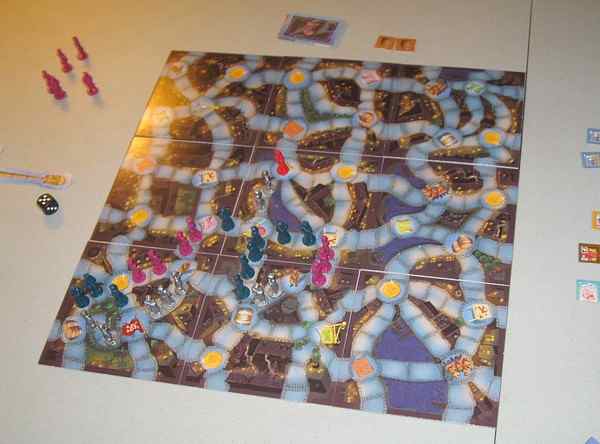 Rum & Pirates does have a reference to drinking adult beverages (chiefly rum, I suppose) at taverns or pubs. So if this isn’t something you want your children to be exposed to, simply play it only with other adults.

Apart from that caveat, Rum & Pirates is a truly fun game with some mechanics you’re not likely to find anywhere else.

The modular game board is made of 9 similar square tiles that you randomly arrange before starting play. The alleys that connect each action spot are constructed so that the boards all fit perfectly together no matter which one you put where.

One of these squares shows a red flag which is where the captain (a red pirate token) will start the game. Each player (2-5) will start with 10 pirates of his own color – blue, dark pink, black, gold, or silver. Each will also have 5 more pirates in the pirate unemployment office who can be put into service later in the game.

A basic turn consists of placing your pirates on each space in an alley adjacent to the captain and then moving the captain to the intersection at the far end of that alley. Each intersection is an action space which allows you to collect gold or point tokens or something similar. If you want to advance the captain further to take additional actions, you must pay one gold coin to do so.

When all your pirates are on the board, you can do no more actions that round. (There are 5 rounds in the game.) Quite often though, you won’t want to use up all your pirates on the board itself, because you can earn more points by sending a few to the ship where they will wrangle for a sleeping space (i.e. more point tokens).

Among the actions you can do at the intersections are the following.

At the end of each round, you collect all your pirates from the alleys and the ship to reuse them for the next round. After the final round, the points on the tokens are totaled, and the player with the most points wins.

A very nice, well-thought-out feature of Rum & Pirates is the storage tray for all the little square point tokens (and coins). Each type of token has its own slot in the tray, and there is a clear cover that fits snugly over the top that prevents them from getting jostled around when storing the game.

The pirate tokens are fun to handle and are well-suited to their purpose both physically and thematically. The pirate theme obviously is carried throughout every facet of the game even to the point of “requiring” players to call, “Avast!” to signify the end of their turn.

Rum & Pirates plays well with any amount of players from 2 through 5 but is probably best with 3 or 4. With a fun name like Rum & Pirates though, you shouldn’t have much trouble finding a few other people to play the game with you.

Avast! It Be Rum & Pirates Time