Don Quixote the game is better than the book bearing the “hero’s” name. Much better.

The Ingenious Gentleman Don Quixote of La Mancha by Cervantes is generally considered one of the best pieces of literature of all time. Personally, I think the book is seriously overrated.

Don Quixote the board game is not be the greatest game of all time, but it probably deserves a place on your game shelves. 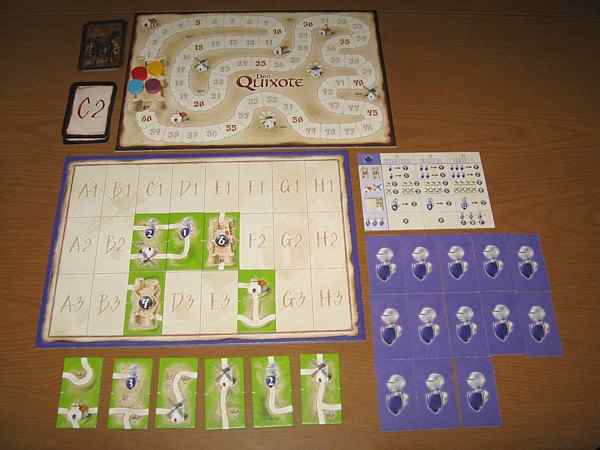 How Do You Play Don Quixote?

As you can see in the picture above, you have a set of tiles that you will place on your personal player board. But you can’t set them on just any open space. The flip of a card (upper left in the photo) tells everyone the location in which you must put a tile. The tile you put there is up to you.

Before the first of the game’s 3 rounds begins, you flip the first two cards from the top of the deck. You place your 2 castle tiles on these spaces.

In the picture above, everyone set their castles on spaces E2 and C3. One of your goals is to connect tiles that show knights to those castles. 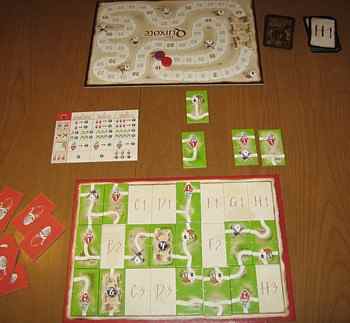 As part of setting up the game, you turn all of your tiles – which show roads, churches, windmills, and knights – face down.

Just prior to Round 1, you flip 9 tiles face up. Those are the only tiles you can use in that round.

Trying to plan ahead when placing those tiles is a major part of the game. Sometimes (okay, often) you don’t want to place a tile where the card says you have to put it.

You do the best you can.

In the second round, you choose from a new group of 7 tiles and place them as cards are flipped.

In the final round you reveal all but 1 tile. After everyone places the set of 5 tiles, the last tile goes in the 1 remaining open spot – again, whether you want it to or not.

Scoring occurs after each of the three rounds. Churches and windmills always count the same in each round. Each pair that you have managed to connect by roads are worth 2 points. Three together are worth 6, four count for 8, and so on.

Knights – which have a point value of 1, 2, or 3 on their shields – are especially tricky to position for optimum scoring. You need them to face the edge of the board and hopefully also to be connected to your castles. Each round it takes more knights to be in the right position before scoring them is even permitted.

After the final round, you also score points for the longest chain of knights connected by roads – somewhat similar to church and windmill scoring.

How Do I Manage All This Madness?

This random tile selection is probably your greatest challenge to overcome in this game. You are always hoping for just the right card to appear so that you can place this tile right there before that tile shows up. It rarely happens that way. Deal with it.

There are many times when playing Don Quixote that you’ll feel the futility of tilting at windmills (an activity mentioned only very briefly in the book), but that’s actually part of the fun of this game. Knowing that everyone else is riding the same horse (almost literally) helps.

Tilting at a Board Game – Don Quixote