Die Macher (pronounced dee mocker and translated from German as The Makers) is a board game I acquired too soon in my board gaming career. I opened the box, looked at (but didn’t punch out) the bits, read the rules, and put it away. I then traded it for another board game without ever attempting to play it. 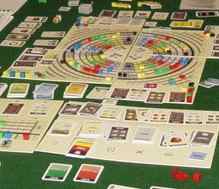 So I can’t say for sure if I like Die Macher or not, but I have the feeling I wouldn’t, mostly because of the political aspects involved. I’m also fairly certain it would rarely, if ever, get played because of its length (6 hours) and number of players needed (3-5, but not recommended with only 3) for a decent experience.

That said, this is a very popular board game and not one you should dismiss without further examination.

Die Macher is a resource management game in which you will do well if your German national political party does well in regional elections.

If you’re still a rookie or sophomore in your board gaming career, you might want to postpone picking up Die Macher for fear of making the same mistake I did. But if you’re a seasoned veteran of the gaming world and have the resources for play, go for it. Odds are you won’t regret your choice.

Check the price of Die Macher on Amazon.

Die Macher – Not for the Faint of Heart Board Gamer