Blue Moon City is a fun board game for 2, 3, or 4 players that combines a modular board, cards, and dragons to make for simple, yet very interesting, game play. 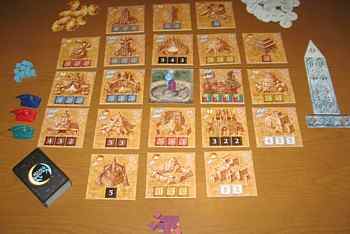 The board tiles are semi-randomly laid out in the grid shown in the picture. Your pawn starts on the center tile. From there you move around the board trying to rebuild the buildings on the other tiles by paying the costs shown using your cards (with values of 1, 2, or 3) as payment.

Most of the cards have other powers as well which obviously adds to the interest and competition.

If you contribute to the construction of a building while a dragon is located there, you receive a golden dragon scale token. Why there are dragons involved in the game goes back to the game of Blue Moon, which is related to this game in name and theme only.

When a building has been completed, those involved in its construction receive rewards in the form of dragon scales or cards or blue crystals.

When the supply of dragon scales is exhausted, more crystals are paid out. Your ultimate goal is to collect enough crystals to make an offering to the obelisk. Whoever makes the most offerings will win the game.

There is plenty of opportunity for trying out different strategies with your cards and movement on the board. Games of Blue Moon City are likely to be closely contended, so you’ll want to make the most of every turn.

With the modular board (and available expansion set), Blue Moon City should offer plenty of replay value making the game in general a good value for the relatively low price.

Check the price of Blue Moon City on Amazon.

Once in a Blue Moon (City) Board Game