Up Front is a card game that is ancient by current standards. It was way ahead of its time back in 1983. Those who enjoy such war games (not me so much) still love to play it today. 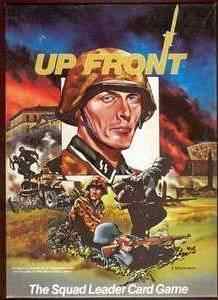 Besides the multitudinous rules common to war games, you do actually get to fight the “bad guys” – either American or Russian – in Up Front. One difference is that you don’t have a ton of cardboard bits to contend with. You also don’t have complete knowledge of the future. Everything is much more unpredictable.

Up Front plays quickly from turn to turn, with a full game only taking about an hour. When you interact with your opponent, killing one of his men normally takes more than one turn. After the first shot, he’ll hide. If you can hit him again before he rallies, you’ll take him out of the game.

As in a real war, opposing sides are rarely evenly balanced. If they were, determining a winner would be virtually impossible. From game to game of Up Front, the relative strengths of each army will vary too.

If Up Front sounds interesting to you, hopefully you can find someone who will teach it to you so you don’t have to go it alone with all those rules. That said, I know there are some of you who live for rule books like this, so more power to you.

Check the price of Up Front on Amazon.

Redo WWII with Up Front