Twilight Struggle sure sounds like it should be a war game, but it’s not. It is about a certain type of war though – the Cold War, the struggle between capitalism (USA) and communism (former Soviet Union) that went on from the late 1940s through 1991. 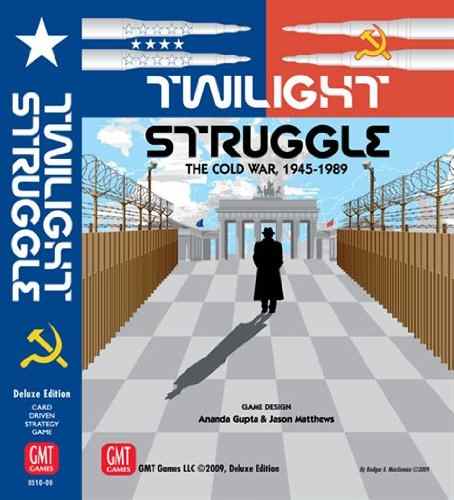 Twilight Struggle is essentially a card game about area control. You use the events of the era to get your side to win. One of the twists is that sometimes you have to actually play an event that helps the other side. Your job, in that case, is to play it when it’ll do the least damage to your own cause.

Some have called Twilight Stuggle “El Grande on steroids”. I love El Grande; I give it a 10 out of 10. I’m not so sure I’d do the same for Twilight Struggle though. There are very, very few 2-player games that I like as well as games that work for 2 but can handle 3 or more players.

Twilight Struggle has a fair amount of luck. You can’t control the order of the cards. If you like near total control in your board games, you may want to look elsewhere. If you’re okay with the luck and don’t mind slogging through a few more fiddly rules than usual, then this might be your cup o’ tea.

Check the price of Twilight Struggle on Amazon.

Twilight Struggle – Not the War Game You Think It Is