Playing a Game to Get Eddycated?

Non-Trivia(l) Pursuit (Non-Trivial Quest) is a niche board game within the board game niche. It’s stated goal is “make it interesting and fun to think, remember, and learn.” Yet unless you already have a decent education, you’ll never get anywhere playing this game – unless you’re an awesome guesser. 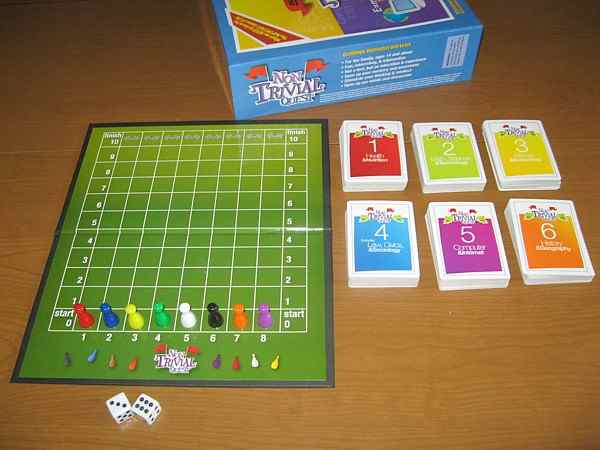 The questions provided should be answerable by most middle school students. Educated adults shouldn’t have trouble answering 99% of the questions – not counting those that are poorly constructed. (More on that later.)

That brings me back to the main problem with this game: If you’re not yet educated, you have to guess. If you’re already educated, you shouldn’t miss. In either case, what’s the point of playing then?

This game will educate you, especially if you’re willing to read through the (sometimes lengthy) explanations following the multiple choice answers. But again, if you’re that uneducated, you’ll never finish the game – except by wild guessing. There’s little to nothing in the questions that will give you a clue as to the correct answer.

How To Play Non-Trivia Pursuit

The mechanics of the game are simple. Roll two dice. Select one of the results as one of six categories of questions from which to choose – Health & Nutrition; Math, Science, & Technology; Money & Economics; Everyday Law, Civics, & Sociology; Computer & Internet; History & Geography. Listen to the questions and 4 possible answers. If you answer correctly, move your pawn up one space on the board. If you’re wrong, move it back. (Other scoring variations are possible.) First one to the other end of the board wins.

You only get one question per turn. Assuming 2 or more educated adults are playing, the one who started should always win. There is no “catch up” mechanism and no way to even tie.

We received this game for free as a review copy. After only 2 plays, we found a few questions/answers of dubious quality. Look at these examples.

2) How often do we have a leap year and why? For the frequency part, I’d say every 4 years, except for century years not divisible by 400. The expected answer, of course, is simply every 4 years.

3) What can you do if you suspect someone may be having a stroke? I’d say call 911. The given answer suggests that you first perform the stroke test. Do you know the stroke test? We probably should, but since we don’t, I’ll go with calling 911 first.

I can only assume unfortunately that there are other questionable questions in the rest of the decks.

What To Do with This Game

Non-Trivial (now called Non-Trivia, due to a complaint from Hasbro) Pursuit has its niche, but it’s a very narrow one. Young people who are educated enough to get most of the answers right will be most satisfied playing this game.

It would serve as a good review of what they already know and would teach them a few new things along the way. I doubt if many of them would voluntarily choose to play this game – given the more exciting and interesting options available these days, however, so it might have to be part of a classroom exercise. Some teachers might find uses for it when reviewing prior to tests.

I would like to give this game more compliments, considering its worthy goal, but sadly I cannot. Here’s to hoping you find it more enjoyable and useful than we did.

In Pursuit of Education