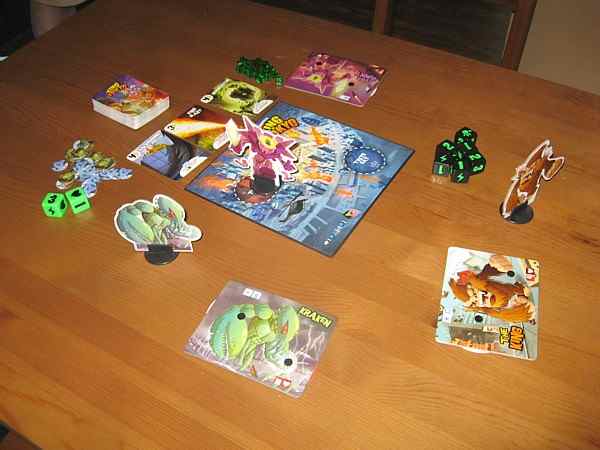 So you want to be King of Tokyo, do you?

Sure, you can be king, but I bet you won’t want to sit on the throne very long!

You play as a monster fighting other monsters for (temporary) control of the city. Your goal is to either score more points more quickly than the rest or knock them out of the game.

How Do You Play King of Tokyo?

Each players selects a monster, and the battle for Tokyo begins.

You roll 6 specialized dice, choose the ones you want to keep (Yahtzee style) and reroll the rest up to 2 more times.

Three of the dice faces have the numbers 1, 2, and 3. If you roll at least 3 of a kind of a given number, you get that many victory points. You can get extra points for rolling more than 3 of a kind.

If you roll a lightning bolt symbol, you get one energy cube per bolt. You can use these cubes to buy cards that give you special abilities.

If you roll a claw symbol, you can attack other monsters. If you are already in Tokyo, you attack all players not in Tokyo. If you’re not in Tokyo, you go after the monster who is in Tokyo. When you attack the monster in Tokyo, that current king can choose to yield his throne to you. You can only stay in the game if you retain your health, so you won’t want to be king forever with everyone else causing you harm.

If you roll a heart symbol, you can keep it to heal the damage you have sustained from attacks. You start with 10 hearts (health points), which you quickly start losing during attacks. And here’s the kicker: You cannot heal if you are the King of Tokyo.

But there is a benefit to being King.

When you first become king, you gain a victory point. If you stay in Tokyo for an entire round, you gain 2 more victory points at the beginning of you next turn.

The winner is the first to gain 20 victory points or to be the last monster standing.

You Won’t Be King for Long

Sounds pretty simple, doesn’t it? It is.

What makes King of Tokyo worth your time?

It’s quick and easy, but the real fun is in the cards. They add flavor to the game both from a thematic point of view and a mechanical perspective.

The designers could have had unimaginative text on the cards like “Roll again” or “Lose 3 points”, but instead they created cards with thematic texts and graphics that are much more fun to use.

There are a few strikes against King of Tokyo. It costs quite a bit for such a short game. It’s very confrontational, so if you like games where you don’t have to struggle against other players, you probably want to give this one a pass. As noted above, players can be eliminated.

If none of those things really bothers you…

Check the price of King of Tokyo on Amazon.

King of Tokyo: A Dice Game for the Monster in You

One thought on “King of Tokyo: A Dice Game for the Monster in You”