Torres, a Game of Towers 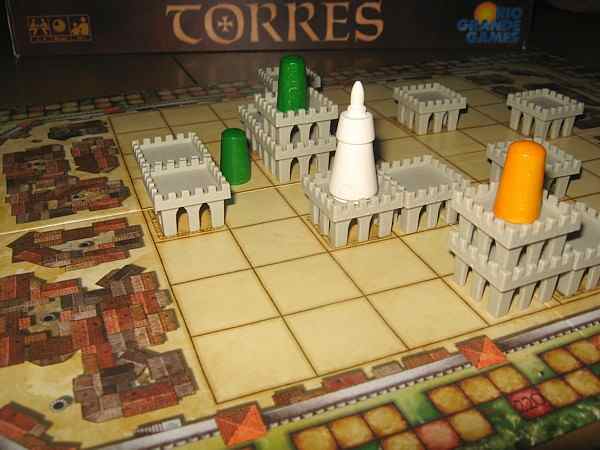 Torres is a board game designed by a pair of my favorite designers, Wolfgang Kramer and Michael Kiesling. They also designed my favorite board game, El Grande.

Torres is kind of a thinky game. It’s not difficult to understand or learn at all, but you have 5 “points” to spend each turn on various possible actions – 6 in all, though 1 of them is free – that will give you pause and make you ponder how best to use them.

There are rules that the rule book considers alternate rules, but I consider them essential. I’ve always played my games with them because they don’t make the game any more difficult to play. What they mainly do is give you another goal to shoot for so you can score more points.

The initial setup of the board that is suggested for beginners has one tower piece placed on each of 8 designated spots on the board, thus starting 8 castles. Each player then places one of his knights on an empty tower, and the last player places the tall, white king on an empty tower as well.

On your turn, you can spend those 5 action points to do some of these actions.

You can also play an action card that you drew on a previous turn, but this doesn’t cost any action points. 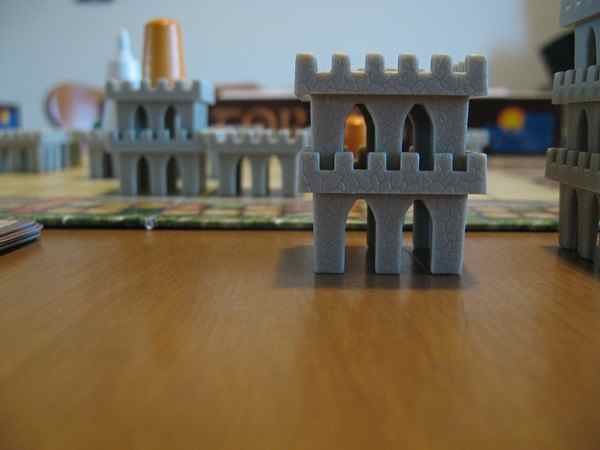 The main way to score victory points (he who has the most at the end wins) is by having knights who are in control of large castles. Castles can expand horizontally, increasing their surface area, and they can expand vertically, adding more floors to the structure.

If you have your knight on the topmost floor of a castle at scoring time, you will score the maximum number of points for that castle. You multiply the surface area by the number of floors to calculate your score. Thus, if the castle has an area of 4 tiles and it rises 3 levels above the board and you have knight sitting atop it, you’ll score 12 points.

If you’re not way up on top, you can still score points – just not the maximum possible. If I’m on level 2 of a castle with 4 base tiles, I’ll score 8 points – even though you may have a knight up on level 4 who scores 16.

Combining that basic goal with the action cards and (probably) an additional goal as shown on one of the master cards (from the alternate rules) gives you a very interesting game. Even with all that going on, you can play Torres in about an hour.

Torres is played over 3 years (rounds). In each year, you have a limited amount of tower tiles you can place each turn while spending your 5 action points. Spend them wisely and you’ll do well in this fun board game.

Is Torres Good Enough to Get and Keep?

I traded something away to get my copy of Torres. I only played it a few times and then realized it wasn’t going to see much table time. It’s not that I didn’t like it, but other games we liked more would see the table sooner. So I traded it away for something else.

Check the price of Torres on Amazon.