Elves, Dwarves, and Gnomes – Oh My! 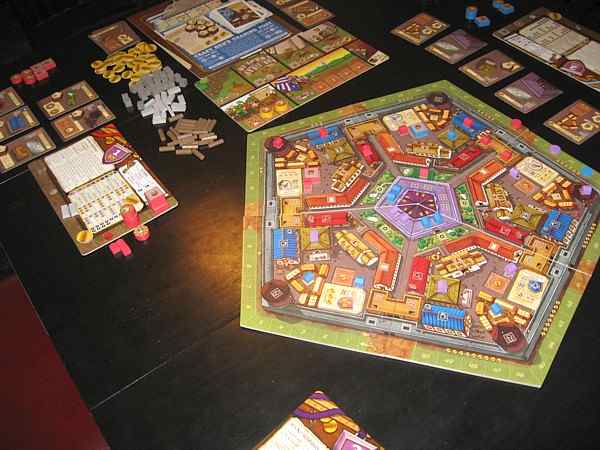 Circular elves, square dwarves, and pentagonal gnomes are your friends in Belfort. Those shapes are actually the wooden bits in those shapes. The characters are stickers you get to apply to them. All three types are the tokens you place on various guilds, buildings, and other game board spaces to performs actions and collect resources – wood logs, stone cubes, metal ingots, and gold coins.

Belfort is a worker placement and area control game. Thus it has a very “euro” feel. The main board consists of 5 districts which are identical except for the scoring and taxation tracks around the edge.

Each district contains a random guild card, selected during setup. It also has many buildings and other structures you can build to gain control of the district and thus score victory points after rounds 3, 5, and 7 (the final round). The structures include pubs, inns, banks, walls, towers, and more. Each requires a combination of wood, stone, and metal resources. Most are built by playing the associated card and spending the resources.

You gather the resources by sending your elves and dwarves to the guilds, to the forest, quarry, and mine, and to the trading post.

After the first scoring round, you’ll likely owe some taxes for which you’ll need gold coins. Many of the elves and dwarves actions also cost a coin or two, making money a scarce commodity.

Is That All There Is To Belfort?

In a word, no. The above is a very simplistic view of this game. There’s more to it than I can convey here. Belfort is actually kind of a heavy game.

One aspect involves the need to balance all the elements and determine the best places to build your structures while increasing your elvish, dwarvish, and gnomish work force to score more points than your competitors.

The two-player version of Belfort requires that you exercise a small amount of control over a third and fourth player. Often this is a facet of a game that I dislike, but since it didn’t seem very intrusive here, I didn’t mind so much. Still, it is generally more fun with 3-5 players.

Belfort is a wonderful strategy game that you’ll enjoy, if you like to put a little effort and thinking into your game play.

Check the price of Belfort on Amazon.

One thought on “Belfort Board Game Reviewed”