Claim It! vs Can’t Stop

If you’re not familiar with the classic press-your-luck board game of Can’t Stop, take a couple minutes to read this review. 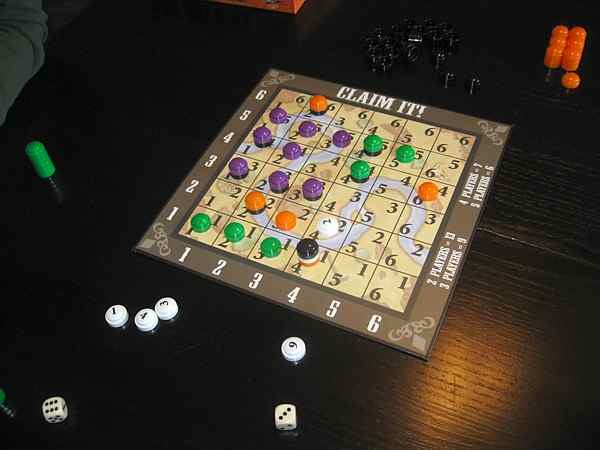 The board game Claim It! is sometimes compared to Can’t Stop because of that press-your-luck feature, but I don’t really see much resemblance between the two. I like both of them well enough, but each for their own merits, not because they are very similar.

As you can see in the picture of an actual game in progress, Claim It! consists of a square board showing a grid of smaller squares. Each square shows two numbers – every combination that can be produced by 2 dice.

Your task is to claim the largest number of adjacent squares by the end of the game. The final round of the game is triggered when a certain number of squares (depending on the number of players) have been claimed by one player.

How To Stake Your Claim

So how do you claim those squares?

You first roll 3 dice. Then you examine the board to see if you can use the resulting roll to place a “Squatter” token on a square. Squatters are 6 white disks numbered 1 through 6. You match two of the dice to the numbers on a square and place the Squatter matching the third die on that square. If you can’t match any two of the dice to a square and have an appropriate Squatter to go with it, you’re probably “bust”.

I say probably because, if you already have a Squatter or a “Settler” (a disk of your own color) on a square from a previous turn, and you roll numbers for that square again, you can place a “Claim” (black disk) on that square, even if the third die doesn’t have an available Squatter.

If you roll a combination that has an opponent’s Settler on it, you can squat on top of him and evict him from the spot, if you stop rolling dice before going bust.

When you do decide to stop rolling, you replace any Squatters with Settlers. You also place any Claims under your Settlers. Such squares are yours for the remainder of the game.

There’s a lot of battling back and forth for territory. You evict your opponent(s) and vice versa. The rolls of the dice definitely inject some randomness into the game, but there’s not nearly so much risk taking as in Can’t Stop. More often, you’ll stop sooner when you’re satisfied with the claims you’ve been able to make and/or with the evictions you’ve been able to execute.

Claim It! is very family friendly combining a good amount of strategy and luck. If you check around, you might be able to pick up a game rather cheaply because it hasn’t been high on many gamers’ play lists, even though it deserves to be.